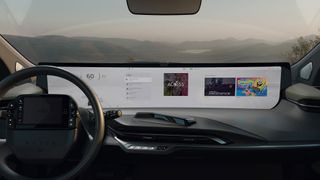 The huge 48-inch display inside the Byton M-Byte - the all-electric car's party piece - is now more entertaining after the firm announced new app partnerships and developer program during its CES 2020 press conference.

Byton is developing premium EVs (electric vehicles) to go directly head-to-head with Tesla's Model 3, Model S and Model X, with the M-Byte SUV the first initial car, which will then be followed by the smaller K-Byte.

The visually-stunning screen - dubbed the Byton Stage - demands attention when you're sitting in the car, and with apps including AccuWeather and ViacomCBS, it's now more useful too.

With the ViacomCBS app, passengers in the M-Byte will be able to watch live TV on the massive display - although only in-between driving, not while the car is moving. Safety first, kids.

Meanwhile, AccuWeather will provide - yep, you've guessed it - weather information on the screen - however it does more than just tell you what it's like on the other side of the windshield.

The app can work alongside the navigation. keeping you informed about the weather conditions on your route with minute-by-minute updates, so if the forecast turns bad you'll know before hitting the poor conditions. This, Byton says, will allow for safer driving.

You'll hopefully see more apps arrive on Byton's in-car platform in the near future too, with the help of the firm's new developer platform. It has released "UX Design documentation and app development guidelines for partners and developers.

"Byton is developing apps and services for entertainment, health, productivity, eCommerce and other experiences that seamlessly merge the mobile and automotive worlds."

You still can't buy one though

We first saw the Byton M-Byte back at CES 2018, at which point is was being shown off as the Byton Concept, and two years on we're still waiting for the vehicle to go on sale.

Originally we were told the M-Byte would be available towards the end of 2019, then Q4 2019 for China only and now Byton is saying Chinese customers will receive their cars in the middle of 2020. Meanwhile, US consumers will have to wait until 2021 for the first deliveries, after initially being told Q3 2020, with a target price of $45,000.

Byton claims the M-Byte will have a range of up to 285 miles (with the top of the line 95kWh model). There's a fast charging option too, which can give you 150 miles in 30 minutes. It'll arrive with 4G LTE connectivity, but customers will have the option to upgrade to 5G in the future.

So, the waiting game continues. Whether the M-Byte ever makes it off the production line and into people's garages remains to be seen, but if it does make it the huge display could change in-car design on a much bigger scale.