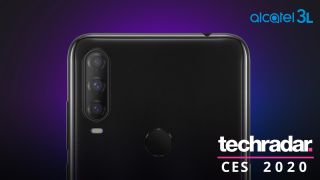 Most people discount Alcatel as a budget smartphone maker whose phones don't offer great value, but the company has just given us a new reason to care – it just unveiled a smartphone with a 48MP camera that's cheaper than any other device with this kind of snapper right now.

Although top-end phones have migrated to 64MP or even 108MP snappers, the resolution rush really started with 48MP sensors, and we've never seen one for such an affordable price.

So what are these three new phones like? While we wait to get hands-on with the devices, we'll quickly run you through their specs.

The Alcatel 3L is the phone with the 48MP sensor camera, which is accompanied by 5MP ultra-wide angle and 2MP macro cameras so you can take a range of different pictures.

The screen is 6.2 inches diagonally, and while we don't know much about the phone other than this, we do know it'll come with 4GB RAM and 64GB internal storage.

The phone is set to launch in early 2020 for €139 (around $155, £120, AU$225), so it's very affordable. Before this, the device that held the crown for cheapest 48MP smartphone camera was the Redmi 8T, but unless the Alcatel 3L is shockingly expensive in other regions, it seems Redmi has been usurped.

The camera array here consists of 13MP main, 5MP depth and 2MP macro shooters, which is certainly a novel configuration for a triple-lens camera, although we've seen weirder before.

Something that's worth knowing with the Alcatel 1S is that despite being a super-affordable phone, it still resembles a typical Android device that'd cost easily a three-figure sum, and doesn't look cheap or tacky at all.

If you want the cheapest smartphone possible, the Alcatel 1B is for you. It costs only €79 (about $90, £65, AU$125), which is an incredibly low price for an Android handset, especially one with Android 10 (albeit the Go edition).

Sure, you're only getting a 5.5-inch screen, 2GB RAM and a single 8MP rear camera, but you're also getting a 3,000mAh battery which, for a budget phone like this, will easily see you through a day.

So if you want a phone that's comfortably budget, without even a fingerprint scanner, this is a decent device for you.