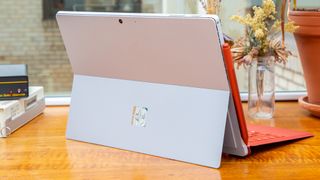 Microsoft has done surprisingly well in the recent iFixit teardowns of its freshly launched Surface devices so far, but that good track record has been ruined by the Surface Pro 7.

Although it’s probably no surprise that the Surface Pro 7 has been rubbished in terms of its repairability score, seeing as it’s pretty much the same device as the predecessor Surface Pro 6, save for a few choice upgrades.

Indeed, if you cast your mind back to last year, you might recall that iFixit declared that the Surface Pro 6 was “just as un-upgradable and un-repairable as ever”, scoring it 1 out of 10 for repairability.

And the new Surface Pro 7 also scores the same 1 out of 10, with many of the same complaints, including that old chestnut of the overuse of glue. According to iFixit, the battery is firmly glued in, “requiring tons of heat and prying” to get the power pack out.

And any repair requires the display to be removed first, and that screen is “stubbornly glued in place”, and prone to shattering when trying to extract the thing.

On top of that, the system memory and SSD are soldered to the motherboard, so it’s not possible to replace or upgrade these components. And these are pretty much the exact same criticisms levelled at the Surface Pro 6, as mentioned.

So if you do get a hardware problem with your Surface Pro 7, and are looking to find a third-party repair outfit to fix it a bit more affordably than a Microsoft out-of-warranty replacement, odds are you’ll still be paying through the nose, relatively speaking (just as with its predecessor 2-in-1).

There’s no real repairability improvement over the Surface Pro 6 here at all, it would seem, maybe save for the fact that at least the battery connector is more easily accessible with the new Surface Pro (although that doesn’t really make the heavily glued battery any easier to get out).

What’s also worth noting is that the battery is actually slightly smaller than the Surface Pro 6, with a 43.2Whr capacity compared to a 45WHr power pack previously. And as we’ve seen, the reduced amount of battery longevity with the Surface Pro 7 is one of the biggest disappointments of the new hybrid.

As we noted at the outset, all this is no real surprise, but still rather a shame compared to how well the Surface Pro X did in iFixit’s recent teardown – and indeed the Surface Laptop 3 which also scored pretty reasonably for repairability.

Both of these devices avoided the typical glue-filled horrors seen here, and indeed the Surface Pro X represents a new high for Microsoft in terms of a repair-friendly piece of hardware.

Oh, well. Here’s hoping for something better in the repair stakes with the Surface Pro 8…