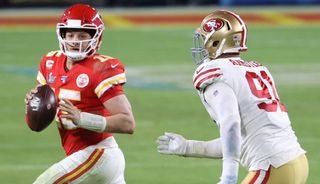 UPDATE: It's all over and the Kansas City Chiefs have won Super Bowl 2020 after beating San Francisco 49ers by 31-20.

Super Bowl 2020 - the climax of NFL's 100th season - has certainly lived up to the billing. It was even at halftime before the 49ers took a healthy lead, but now the Chiefs have blasted them and have a hand on the Vince Lombardi trophy.

However, if you're looking to re-watch it or you didn't quite catch every pass or tackle - don't panic just yet, simply keep reading to find out how you can watch the Super Bowl LIV  no matter where in the world you are (or with a VPN.

Where and when is Super Bowl LIV?

This year’s Super Bowl between Kansas City Chiefs and San Francisco 49ers was held at the Hard Rock Stadium in Miami Gardens, Florida.

Well, it's safe to say that the Super Bowl LIV certainly lived up to it's name - not only did the Chiefs beat the 49ers in spectacular form, but Shakira and Jennifer Lopez made history in the half-time show by being the first two Latina women to headline the event.

Even though the Chiefs went in to the fourth quarter with 10 points behind, they managed to score three touchdowns over the course of just 5 minutes 1 second of game clock after quarterback Patrick Mahomes engineered a stirring fourth-quarter comeback.

Ready to re-watch this incredible sporting event? Keep reading to find out how you can watch the Super Bowl LIV from anywhere in the world!

How to live stream Super Bowl 2020 - our favorite choice for watching without commercials:

If, like us, you'd like to watch a live stream online without any commercial breaks, then following these three simple steps will help:

If you don't have easy access to stream Super Bowl live online in your country - or you're away from your home country when it's on - the best way to watch it for free is to download and install a VPN. We've tested all of the major VPN services (more than 100 in total) and we rate ExpressVPN as the absolute best.

It's compatible with a whole host of devices (including Amazon Fire TV Stick, Apple TV, Xbox and PlayStation, etc) and ranks amongst the fastest options out there. What's more, there's a great deal running offering a 49% discount, a 30-day money back guarantee and 3 months free with an annual plan - especially for TechRadar readers! So if you were already interested in VPNs now is a great time to sign up.

2. Connect to a UK server location

Simply open the VPN app, hit 'choose location' and select a UK location - it doesn't matter which one and it's super easy to do. The reason to choose the UK? Because it's being broadcast live for free, so as soon as you have a UK IP address you're free to live stream the Super Bowl hassle free.

TVPlayer is a free legal online streaming service, which offers hundreds of channels. Among the channels you'll find on offer at TVPlayer.com on offer is BBC One which will show the entire event live. And the best bit? The BBC doesn't have commercials so you'll be able to enjoy a totally uninterrupted Super Bowl live stream without a single commercial break.

How to watch a Super Bowl 2020 live stream for free in the US:

The NFL game pass seems to be the best bet, it's offering the NFL game replay, game highlights, the coaches film and the game in 40 minutes!

How to watch Super Bowl online in the UK for FREE:

It's the same case for the UK that it is for the US - head on over to the official NFL website and subscribe to the NFL Game Pass.

Don't need the full re-play? You can also catch the highlights on BBC iPlayer.

However this isn’t your only option, you can also watch the game live on Sky Sports or on its app Sky Go.

And it's worth repeating...if you're outside the UK and still want to watch your home coverage, then take a look above at how to do so without difficulty by downloading and installing a VPN.

So far it seems to be the same case for Canada that is for the US and the UK, it's time to get the one and only NFL Game Pass. Plus at $19.99 it's ridiculously good value for money - you're getting this pass until until 31 July 2020!

How to live stream Super Bowl for FREE in Australia

Great news for Aussies, it's the same case Down Under as the above countries!  It's time to go ahead and sign up for a NFL Game Pass!

Each year the Super Bowl takes place on the first Sunday in February. This year that means the Super Bowl will take place on Sunday, February 2. Kick-off time will be 6.30pm ET.

Who is performing at the Super Bowl 2020 half-time show?

The half-time show is being talked up as seriously spectacular this year (unlike last year's rather underwhelming performance) with Jennifer Lopez and Shakira joining forces for what is set out to be an incredible performance. The pop stars are set to bring all the glitz and glam to the event.

You can read more about it and see where and when to watch it with our dedicated guide on how to watch the Super Bowl halftime show online.

Who has previously performed at the Super Bowl half-time show?

Usually known for being a wonderful, epic and energetic spectacle, the Super Bowl half-time show has been graced by some of the most famous and popular artists out there. The previous line up includes Bruno Mars, Red Hot Chili Peppers, The Rolling Stones, Lady Gaga, Beyoncé, Diana Ross, Prince, Slash and many more.

What are the Super Bowl 2020 predictions?

Thanks to their impressive regular and post-season campaigns, the San Francisco 49ers are many bookies' favorites to take the big one this year. But it's still very close to call between them and the Chiefs.

Which team has the most Super Bowl wins?

The answer to your question would be the New England Patriots... tied with the Pittsburgh Steelers! Both teams have each won six Super Bowls, although the Patriots have had the most recent win (2019), the last time the Steelers got crowned the Super Bowl champions was in 2008.

Which city has never hosted a Super Bowl?

The Cleveland Browns are the only team to date who has neither played in nor whose city has hosted the game.

What Super Bowl commercials for 2020 will there be?