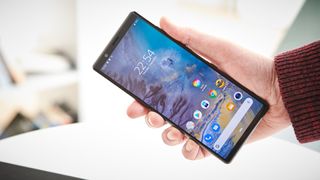 The Sony Xperia 5, above, could be getting a plus-sized upgrade (Image credit: Future)

Sony is likely to have a successor to the Xperia 1 on the way in the next few months, and we now have a much better idea of what it might offer, as renders and specs for a new Sony flagship have just leaked.

Shared by @OnLeaks (a reliable leaker) for SlashLeaks, the phone is referred to as the Sony Xperia 5 Plus, and it apparently has a 6.6-inch flat OLED screen, a quad-lens rear camera with one lens being a Time of Flight (ToF) depth sensor, an 8MP front-facing camera, and dual front-firing speakers.

The Sony Xperia 5 Plus is also listed as having dimensions of roughly 168.2 x 71.6 x 8.1mm (or 9.3mm including the rear camera bump), and a side-mounted fingerprint scanner.

From the images you can see that there’s a slim bezel above and below the screen, a likely 21:9 aspect ratio, and a 3.5mm headphone jack on the top edge.

It looks, unsurprisingly, a lot like a larger Sony Xperia 5, just with possibly slightly smaller bezels. However, the Sony Xperia 5 Plus name does still seem a bit clunky, given that the Xperia 5 was positioned as a smaller alternative to the flagship Sony Xperia 1. Whereas this phone is rumored to have a bigger screen and is likely to have better specs than either of them.

Then again, it might not launch as the Xperia 5 Plus, as that’s one thing the source doesn’t seem entirely confident of, saying simply that they “assume” it will launch as this. So don’t be surprised if this actually lands as the Sony Xperia 2, Sony Xperia 1.1, or something else altogether.

In any case, we’d take this whole leak with a pinch of salt, as we haven’t heard much else about the Sony Xperia 2 yet, with most previous rumors ultimately referring to the Xperia 5. Still, the source is solid and we’re soon due a new Sony flagship, so don’t be surprised if this is accurate.

Stay tuned to TechRadar for the official announcement whenever it happens, and all the Sony Xperia 5 Plus news and rumors in the meantime.