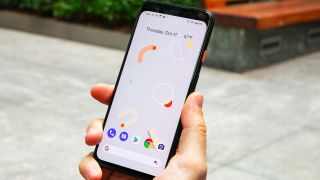 One of the benefits of investing in a new flagship handset such as the Pixel 4, is that it gives you access to exclusive apps and features. Just as the likes of Samsung and OnePlus do, Google gives owners of its latest Pixel devices new toys to play with, and with the Pixel 4 this included the Recorder app.

More than just a simple audio recording tool, Recorder also uses AI and voice recognition to automatically transcribe and label recordings in real time to make them far more useful. Now there's good news for anyone packing a Pixel 2, Pixel 3 or Pixel 3a: the Recorder app is no longer exclusive to the Pixel 4.

The automatic transcription offered by the Recorder app is great for taking minutes of meetings, dictating documents and much more. The app is now being opened up to a wider range of users, giving many more people the chance to avoid the laborious task of transcribing recordings by hand.

It's not great news for everyone, as the app remains exclusive to Google's own Pixel devices, but it's no longer just the Pixel 4. Strangely, Google did not initially make a great fuss about expanding the availability of Recorder but after it was spotted by numerous users, the company went on to confirm things on Twitter:

As the tweet notes, transcription is only available in English, and it's not clear if Google plans to expand into other languages. As with whether or not non-Pixel handsets will be welcomed into the fold, only time will tell.

If you have an older Pixel, you can grab the Recorder app from Google Play free of charge. There's no point trying to install the app on other handsets, as the Play Store will simply tell you your devices isn't compatible – and sideloading an APK downloaded from elsewhere won't help you either.

The app does rely on some on-board Ai trickery to work properly, so non-Pixel owners will just have to sit tight, and wait and see if Google decides to open up this outrageously handy app to other handsets.