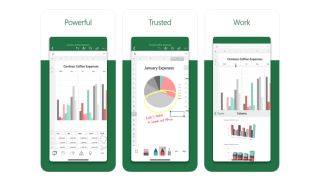 Microsoft has pushed out a big update for its Office apps on iPad and iPhone, with importance changes coming to Word, Excel and PowerPoint.

Each of the three apps has – in Microsoft's words – been made "simpler, faster and more beautiful than before". All three apps have an updated Alt Text Pane to help improve accessibility, but it's Excel users who have the most to look forward to.

Microsoft says that Word, Excel and PowerPoint have all been redesigned from scratch, and it's fair to say that the new look is very easy on the eye. But while the update to the Office apps may seem to be primarily about aesthetics, there are important changes too.

In addition to the Alt Text pane that can be found in all three apps, Excel user also benefit from the arrival of the extremely powerful XLOOKUP function.

XLOOKUP has been available to Office Insiders for a little while now, and is the successor to VLOOKUP. Now it is available to everyone, and it allows you to look for data in cells both horizontally and vertically.

Excel has also been updated with the ability to respond to comments and mentions right from emails, so there's no need to open up a workbook.

If you don't have the apps yet, you can download Word, Excel and PowerPoint from the App Store; if you do already have them installed, now is the time to check for updates to get the latest versions.