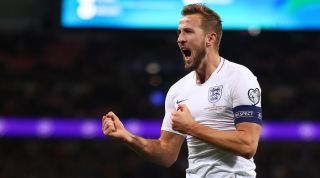 While they may have booked their place at Euro 2020 with a convincing 7-0 win over Montenegro at Wembley on Thursday, England go into Sunday's game against Kosovo knowing that there's still work to be done. You've found the right page to help you find out how to watch a Kosovo vs England live stream.

Their final seeding for next summer's tournament is still under question and a point may be need to ensure they go into the draw at the end of the month as a top seed.

Kosovo vs England – where and when

England's Euro 2020 qualifying match against Kosovo on Sunday will take place at the 13,500-capacity Fadil Vokrri Stadium in Pristina.

Kick-off is at 6pm CET local time, meaning a 5pm GMT start for those tuning in from the UK.

A shock defeat against Kosovo, however, would knock Gareth's Southgate's men down the rankings and could potentially see them placed in a group of death with Portugal and Belgium.

Raheem Sterling returns to the team for England on Sunday having missed out the Montenegro thrashing following his altercation with teammate Joe Gomez. James Maddison his being tipped to make his first start after coming off the bench for his debut on Thursday, while Declan Rice may be given another chance at the base of the midfield.

Kosovo go into the game after a demoralising defeat away to the Czech Republic on Thursday. Had they held onto their second-half 1-0 lead they would have had a chance at automatic qualification. Instead they now find themselves playing for pride against the Three Lions at home.

Read out guide below to find out how to watch a live stream of Kosovo vs England Euro 2020 qualifying football from almost anywhere in the world.

How to live stream Kosovo vs England from outside your country

If you're in the UK, US or Australia today, then your viewing options are set out in simple black-and-white below.

But it's not so straightforward if you try and watch the game from abroad, as you'll likely be faced with a very unhelpful geo-block.

As long as it complies with the broadcaster's Ts&Cs, you can always use a VPN to get around the block. A Virtual Private Network is perfect for this as it allows you to change your IP address so you appear to be in a completely different location. So for example, UK residents can watch the ITV coverage from abroad as if they were back at home.

We've tested hundreds of VPNs and can recommend ExpressVPN as the best VPN currently available.

ExpressVPN comes with a 30 day money back guarantee and is the #1 rated best VPN in the world right now. You can watch on many devices at once including Smart TVs, Fire TV Stick, PC, Mac, iPhone, Android phone, iPads, tablets etc.

Check out ExpressVPN and take advantage of the 30-day money back guarantee and three month FREE when you sign up for an annual plan.

How to stream the England game live in the UK

Great news! As with all of England's Euro 2020 qualifiers, this match will be shown on free-to-air on ITV.

Coverage starts at 4,15pm GMT on ITV 1 and you can watch via television, online or the ITV Hub app for mobile devices.

Not in the UK today and want to get the UK broadcast? Then it's very easy to download and install a VPN and then head over to TVPlayer.com to watch.

Live stream Kosovo vs England in the US

Subscription service ESPN+ has got the coverage of Kosovo vs England live - kick-off is at 12pm ET, 9am PT. The broadcasting giant's online subscription platform only launched in 2018, but has already made waves by hosting big-ticket tennis, soccer, boxing and UFC events.

It costs $4.99 per month - so not huge sums, and less than streaming services like Netflix (and a lot less than cable). That lets you watch online, but also via its mobile app and TV streamer apps on the likes of Apple TV, Amazon Fire TV, Roku, PS4 and Xbox. Or, if you want to bundle it up with the all-new Disney Plus and Hulu, you can grab the whole set for a bargain $12.99.

Again, you're looking at needing a VPN service if you're outside the US today but still want to catch the ESPN action as if you were back in the US.

How to live stream Kosovo vs England in Australia

After securing the rights to the European qualifiers, Optus Sport has live coverage of Kosovo vs England. If you're not in Oz, using a VPN will allow you to watch the coverage on your Optus account.

Kick-off down under is one for the early risers – it's a 4am AEDT start on Monday morning.