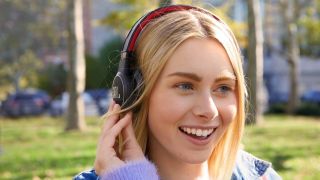 JBL is crowdfunding a new pair of solar-powered headphones on Indiegogo called the JBL Reflect Eternal which could potentially never run out of battery.

The headphones are similar to the JBL's Live series of on-ear cans and come by way of a partnership with Exeger, the makers of the Exeger Powerfoil which is specifically engineered to generate power with light of all kinds, from indoor luminescence to indirect sunlight.

The obvious caveat to the supposedly 'unlimited' battery life is that you’ll need to actually go outside or sit near a window in the office for at least two and a half hours a day for the headphones to stay fully charged. That said, you’ll still get the maximum 24 hours of battery life from one hour of sunlight according to JBL’s website - which, frankly, should be more than enough to last you until you go outside again.

The JBL Reflect Eternal will be available in two colors (red and green) and, according to the product’s Indiegogo page, should be available starting in October 2020 for $169 (around £125, AU$245).

Greener headphones for a greener world

Should they work as advertised, JBL has a potential hit on its hands - not only is this a great solution for millions of commuters who don't want to bother with charging their headphones at the end of the day, but it's also a perfect fit for environmentalists who want to take more steps to be carbon-neutral.

Working as advertised could be the key issue here, however.

The fact that JBL is using Indiegogo to crowdfund the headphones is slightly suspicious. Crowdfunding allows the manufacturer to hedge its bets should the final product not be exactly what it promised. The company can start seeing returns on all that R&D investment when folks immediately invest in the Indiegogo while simultaneously drumming up pre-orders well ahead of the product's launch next year.

Ultimately, like all products on Indiegogo, the JBL Reflect Eternal are kind of a gamble. We've known enough crowdfunding tragedies to be skeptical that these will see the light of day.

That said, if you're a betting kind of person and want to save $70 on the headphones ahead of launch, you can reserve a pair for just $99 right now on Indiegogo.