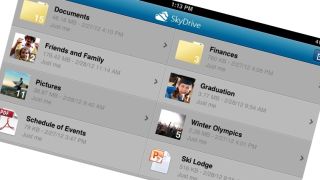 Microsoft has announced a number of new features have been added to its cloud storage service, SkyDrive – including Dropbox-like functionality.

Microsoft has already shown off what is in store for SkyDrive when it comes to Windows 8, but instead of future gazing, this time it has revealed new additions to the existing service for Windows 7, Windows Vista and Mac OS X Lion users.

Essentially users can now sync their files on the desktop using a SkyDrive folder – and using the Windows app for SkyDrive they can drag and drop files to the cloud.

This is a feature that's already found in Dropbox, so will be familiar to many who use this service.

Microsoft also revealed that the SkyDrive iOS app now has iPad support, alongside sharing via web links and the ability to upload multiple videos and photos.

Another clever feature is the ability to access your entire hard drive through SkyDrive.com. there's a two-step authentication process for this, so your files will be safe.

Cutting down on free-dom

Unfortunately, Microsoft is giving with one hand and taking away with the other. New SkyDrive users will find that free storage has decreased from 25GB to just 7GB.

Although, Microsoft is at pains to mention that it has removed the 5GB limit on desktop syncing.

If you are an existing user, then you need to head over to SkyDrive.com and go to the Manage Storage page to keep hold of you 25GB free storage.

Google has begun upping the storage limit on Google Mail this week, which is a massive hint that it is set to unleash its own cloud storage service Google Drive (or GDrive) – so it is no wonder Microsoft has given SkyDrive the overhaul it has.