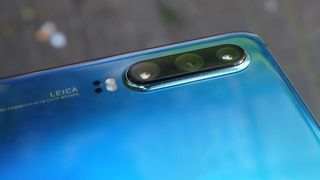 When Huawei CEO Richard Yu announced that the Huawei P40 release date will be in March 2020, he said it would have a "never seen" design – but it looks like that might not quite be the case, as newly-leaked renders show a handset we've definitely seen before.

These renders come from 91mobiles and Twitter leaker @Onleaks, two sources which are prolific in the 'leaked pictures of upcoming phones' sphere. The images are pretty dark, but they show what's claimed to be the P40 from all angles.

The most interesting feature here is the rectangular camera block, which is much wider than the Huawei P30's – so it's likely to house more cameras, or a more powerful flash module. As pointed out by 91mobiles, this kind of wide camera block is becoming popular, with newer Samsung phones expected to use it (including the Galaxy S11), a few phones that haven't made their way to the west, as well as another device from Huawei phone: the Honor View 30.

Huawei is the parent company of Honor, so while the two companies put out different phones, a lot of the tech and research is the same. The images of the Huawei P40 look remarkably like the Honor View 30, which released in November in China as the Honor V30, and will likely be launched worldwide in early 2020.

The renders don't show exactly the same handset – there's one major difference, in the form of the button layout in the sides of the phones.

So... Here comes your very first and rather early glimpse at the #HuaweiP40 and #HuaweiP40Pro in form of gorgeous 5K renders! Once again, on behalf of my Friends over @91mobiles -> https://t.co/2SN4aAstJI pic.twitter.com/kuDnSSyc0FDecember 18, 2019

Other than that, the devices look the same – there's a USB-C port on the bottom, the prominent camera block, and a fairly big body. It's worth pointing out that we don't know too much about the Honor V30 before its global release, and these renders are dark, so there may be more differences we can't see at this time.

One major differentiating point could be the placement of the front-facing camera, as the Honor V30 has a 'cut-out' in the screen, but we can't see what the Huawei P40 looks like in this regard from the renders.

It's also worth pointing out that the 91mobiles renders show a device with curved screens, but that's more likely to be the expected P40 Pro, and the base P40 is likely to have a flat screen like the Honor phone.

So what do the similarities mean for the smartphones? Well, likely nothing – Huawei and Honor work largely independently, so if the phones look identical it's likely because both companies settled on the design of their own accord, perhaps because it's an economical or ergonomic layout for a smartphone. But the fact many companies are starting to use this design shows future smartphones might look a lot more similar than they do now.

We'll know for sure what the Huawei P40 looks like come March – we'll be brining you full coverage of the launch.