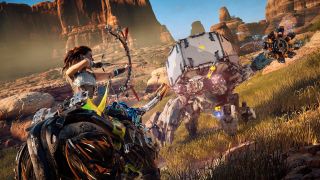 Horizon: Zero Dawn is inbound for the PC, or so the rumor mill insists – and if this is true, getting this previously PS4 exclusive game represents a massive victory for PC gamers.

We are sure we’re not alone in being tempted to buy a PS4 just to play this game (and The Last of Us, which is another biggie we missed out on only having a gaming PC and Xbox previously).

This rumor comes from Kotaku, so it’s a reliable enough source, and it seems that three people who are ‘familiar’ with what Sony is planning all confirmed that Horizon: Zero Dawn is coming to the PC platform.

Kotaku’s sources also seem to believe that Horizon: Zero Dawn will be out on both Steam and the Epic Games Store, although those plans aren’t yet set in stone according to the report.

Note that the game coming to PC has been previously rumored in December 2019, reinforcing this speculation. A Russian YouTuber who correctly predicted Death Stranding being ported to PC (this year) said that Horizon: Zero Dawn will be out in February, with an announcement imminent.

It’s a post-apocalyptic action RPG featuring a sprawling world packed with quests and collectables, backed with a rich storyline, well-fleshed-out characters, and bow combat against robot dinosaurs, some of which are massive and make for some spectacularly intense fights.

If the game does arrive on PC, it will open up new possibilities most obviously in terms of modding and being able to up the quality of the graphics – and indeed to run Horizon: Zero Dawn at more than 30 frames per second (which it was limited to on the PlayStation 4, even on the Pro version of Sony’s console – although you could get better visuals with the PS4 Pro).

Of course, PlayStation exclusives have arrived on PC before, and as we already observed, Death Stranding is due to land soon enough (around the middle of 2020). And we’ve previously seen the likes of Detroit: Become Human make the transition.

What’s different in the case of Horizon: Zero Dawn is that this comes from Guerrilla Games, a Sony-owned developer; and the port would be a first in that respect, if indeed this comes to fruition.

It would also point the way to a possible future where PC gamers eventually get all Sony’s most-coveted games ported over. Let’s keep our fingers crossed on that front…