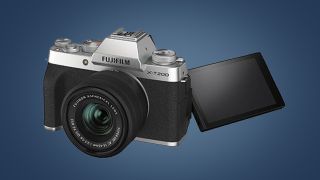 Update 23/1/20: Following yesterday's leaks, we've updated this page with all of the official Fujifilm X-T200 information after its announcement this morning.

There wasn't much we didn't know about the Fujifilm X-T200 mirrorless camera following a major leak, but Fujifilm has just filled in the gaps with its official announcement.

The X-T200 succeeds the Fujifilm X-T100, which is the beginner-friendly mirrorless camera in the company's popular X Series series of APS-C snappers. The new model is effectively a Fujifilm X-A7, only with a viewfinder for those who need to compose shots consistently in all conditions.

So what's new? There are three main improvements: a new, 3.5-inch vari-angle touchscreen, significantly improved autofocus, and 4K video shooting that now extends to 30fps, rather than the limited 15fps maximum of its predecessor.

Together, these features make it a much-improved video camera, and a possible contender for our best vlogging cameras list. Fujifilm has also apparently improved its stills shooting, with the 24.2MP APS-C sensor and processor both tweaked to help reduce noise and boost the continuous shooting speeds to 8fps (from 6fps on the X-T100).

If you like shooting action or moving objects, that improved phase detection AF across the sensor will also be a boon, and helps take the Face and Eye detection up a notch too. Impressively, the X-T200 is also considerably lighter than its predecessor at just 370g (body only), making it a potentially solid all-rounder for travel. We'll bring you our first impressions very soon, but for now here's all the X-T200 Fujifilm X-T200 price and release date info.

There are three colors to choose from – Silver, Dark Silver and Champagne – and the price will be a fairly hefty $799.95 / £749 / AU$1,379, including the lens. That's a fair bit more than the X-T100's launch price, but the new video and touchscreen features could help justify that if it delivers on its all-rounder promise. We'll let you know if it does in our full review very soon.

The Fujifilm X-T200, which will succeed the entry-level X-T100 mirrorless camera, looks to have now fully leaked, with a range of what appear to be official images and specs released by the Japanese site Nokishita.

The leaked information appears to confirm recent speculation about the X-T200's features, which include improved autofocus performance, a new vari-angle 3.5-inch touchscreen, 8fps burst shooting (up from 6fps), and updated Face and Eye detection.

According to the leak, the X-T200 will have the same 24.2MP ASP-C CMOS sensor as the Fujifilm X-T100, but will include copper wiring to reduce noise and read information from the sensor faster. We saw a similar design used on the Fujifilm X-A7, and it produced some impressive image quality results for the price there.

While the X-T200 lacks in-body image stabilization, its vlogging credentials look to have been boosted by the inclusion of new Electronic Stabilization and HDR Video modes. Some details haven't yet been leaked though, including video frame rates. Based on the X-A7's performance, though, we think it's safe to say the X-T200 will shoot 4K/30p video, and there still looks to be the 2.5mm microphone input on the side.

Overall, then, the Fujifilm X-T200 very much appears to be a viewfinder-equipped version of the X-A7, which will please those looking for an affordable mirrorless camera that's equally adept at shooting video and stills. We'll update this story as soon as the camera, along with its full specs and pricing, become available.

Alongside the X-T200, Nokishita also shared some apparent images of the XC35mm f/2 lens, which would make an ideal companion to the camera. Fujifilm's XC lenses tend to be more compact, affordable versions of its XF glass, so we expect the XC35mm to be cheaper than the XF35mm f/2, which costs $399 / £369 / AU$509. Again, we'll update this page once the lens and its pricing are official.

The first leaked images of the Fujifilm X-T200 have emerged, and they've bolstered early rumors that the beginner mirrorless camera will be even more of a vlogging-friendly all-rounder than its predecessor.

We were big fans of the Fujifilm X-T100 when it launched back in May 2018, but it fell just short of making our best vlogging camera list for a couple of reasons: it could only shoot 4K video at 15fps, and its autofocus was only average when shooting video.

Well, the first leaked images said to show the X-T200 have now emerged from the usually reliable Japanese site Nokishita, and they show it in full vlogging mode, with an external microphone sitting in the hotshoe.

It's tricky to draw anything definitive from the photos, but speculation from Fuji Rumors suggests the X-T200 will have a fully articulating touchscreen (instead of the X-T100's rather handy three-way tilt-screen).

That change to the screen design could prove controversial for those who enjoyed the X-T100's slightly less fiddly affair, and the leaked images also suggest the X-T200 will still need a 2.5mm microphone adaptor; but otherwise its all-round improvements suggest it's shaping up to be a fine vlogging camera.

A Fujifilm X-A7 with a viewfinder?

The rumors so far suggest the Fujifilm X-T200, which could be announced as soon as 23 January, will offer similar specs to the recent Fujifilm X-A7. This is good news, because that includes the ability to shoot 4K/30p video, and some impressive autofocus performance, including rock-solid face and eye tracking.

This could potentially make it a great option for those who need one camera that can manage both vlogging and smartphone-beating stills shooting. The viewfinder is essential for shooting in bright conditions, and Fujifilm's X Series has arguably the best range of lenses of any APS-C sensor camera, with a new XC 35mm f/2 lens likely to be announced at the same time as the X-T200.

The only major vlogging-friendly feature it appears to still lack is in-body image stabilization (IBIS), but this usually either adds size to the camera body or is only possible on a camera with a smaller sensor, like the Micro Four Thirds Olympus E-M5 Mark III.

We'll bring you official news of the Fujifilm X-T200 as soon as we get it.