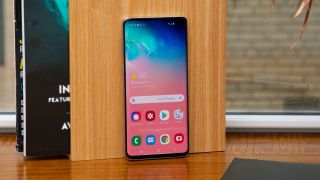 The Samsung Galaxy S10 Lite might have better OIS than the standard S10, above (Image credit: TechRadar)

While it’s looking increasingly likely that the Samsung Galaxy S10 Lite is a real thing, we’ve always found the name bizarre, given both the high-end rumored specs and the timing of its release, and the latest leak just makes the name seem even stranger, as it could include an “unprecedented” technology.

Specifically, @UniverseIce (a reputable leaker) has claimed that the Samsung Galaxy S10 Lite will have optical image stabilization (OIS) technology that’s better than on any current flagship phone.

While they only mention it in relation to the Galaxy S10 Lite, if the technology is that good it seems very likely that it would also be offered on the Samsung Galaxy S11 (or Galaxy S20 as it might be called).

The Galaxy S10 Lite will use an unprecedented OIS stabilization technology on a phone, even better than any current flagship phone.January 2, 2020

OIS helps you keep photos and video in focus, counteracting shaky hands, and proving especially beneficial for longer exposures, where you’d have to hold the phone steady for longer.

Exactly what would be different about its implementation in the Samsung Galaxy S10 Lite is unclear, but presumably it would do an even better job of preventing blurry shots.

It could be even more useful in the Samsung Galaxy S11 (if it makes it to this phone), as that handset is rumored to have modes and features designed for shooting the night sky, which is exactly the sort of situation where a longer exposure could be desirable – and where good OIS is therefore all the more important.

But we’re getting ahead of ourselves – while the S11 is a likely candidate for the technology, there’s currently no mention of it in relation to that phone, and there’s no guarantee it will even make it to the Samsung Galaxy S10 Lite, as right now it’s just a rumor.

We should find out for sure soon though, as the Galaxy S10 Lite is currently rumored to land sometime in January, while the Samsung Galaxy S11 range is likely to launch in February.