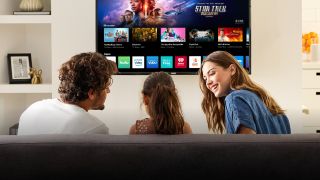 TVs can be expensive, can’t they? With so many models being released each year boasting new panel technologies, HDR formats and 4K (if not 8K) resolutions, it’s a wonder anyone can afford the latest and greatest televisions out there. So you’d be forgiven for eyeing up the cheaper end of the television market instead.

And with Black Friday and Cyber Monday around the corner, there are plenty of cheap TVs to get your hands on – often selling for hundreds less than their original retail price, as retailers seek to shift stock and make room for new models.

There’s a problem, though, when you get to the truly bargain-bucket range of TVs. Under around $100 / £100 / AU$150, you get to the point where the huge saving has necessitated cutting the crucial functions needed to ensure you get a relatively clear, crisp and bearable picture.

That’s not to say you won’t find a good deal in that price range, but getting a budget television at half price (or less than half price) doesn’t stop it being a bargain television, and you might not be getting the basic performance you’re hoping for.

There are lots of parts of a television that can add to the price. They include the TV panel, overall casing, lighting array, built-in speakers, available HDMI and USB ports, TV stand, and even the remote. But one of the most important factors is the internal processor, which will determine whether your TV panel can display smooth motion and color-accurate images, as well as upscale low-resolution content to fit the number of pixels onscreen.

When you get to under $100, you’re rarely getting a capable processor for these tasks. So while you may have got a TV in your living room for a rock-bottom price, it may not be able to do its intended function: show you pictures your movie, TV show or game deserves.

Obviously not everyone minds grainy images if they’re generally able to watch what’s onscreen – and if you’re mostly using it for low-resolution TV broadcasts, or sports matches with high-contrast images (where you don’t necessarily need to see everything in crisp detail, even if you’d like to), and are happy with a small screen, you may not see what all the fuss is about. But even a $300 / £300 / AU$450 television can see a huge uptick in capability, especially if it's been marked down from a higher RRP in the Black Friday TV sales.

It’s worth noting that you won’t get larger than a 32-inch TV at that price in the US, while UK retailers will usually cap at 22 inches for £100. There are exceptions to this, such as second-hand or refurbished televisions, which may be a few years old now but still work reliably – and can be a better idea than a new television worth the same expense.

There are also ways around your TV needs that don’t involve buying an insufficient screen.

What can you use (or buy) instead?

It’s worth noting that if you have a laptop, tablet, or desktop computer, you already have a screen capable of displaying some content, while online TV providers like Amazon Prime, Netflix, Hulu, or the new Disney Plus are fully accessible from web browsers without the need for a smart TV.

For under $100, you won’t get more than HD (or Full HD, at a stretch) resolution on a TV anyway, while many computers match or surpass that resolution. Smartphones, too, get increased pixel counts every year – with flagship phones like the iPhone XS having a resolution of 2,436 x 1,125 pixels – and often have the same streaming apps as computers or TVs.

Netflix even runs a mobile-only streaming plan in some countries because of how many people watch TV on their phones! So there are plenty of smaller, alternative products you may able to fulfil your needs without buying a budget television – especially as you’re probably reading this on a phone or computer.

TVs are increasingly less crucial as other, more multi-purpose devices gain hold in the market – so unless you're gunning for a a TV of a certain scale, that's going to be worth the size and expense, you may be better off elsewhere.

After cheap phones, laptops, or televisions? Check out our guides below: