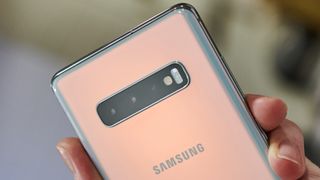 Leaks are aplenty for the Samsung Galaxy S11, a phone that we expect to see in early 2020, and the latest information suggests the chin and forehead of the device are going to be very thin.

According to new leaked photos from Ice Universe - that's a trusted leaker who has provided accurate information about Samsung devices in the past - the device will have a very thin bezel along the top and bottom of the screen.

That should allow Samsung to provide a larger screen or a smaller body size than on previous versions of its Galaxy devices.

There's also a clear cut-out for the selfie camera in the top center of the screen, adding to the growing evidence that this where the front-facing shooter will sit.

Many manufacturers are experimenting with under-screen camera technology, while Samsung sometimes puts front-facing cameras at the top right of its screens, so it was never guaranteed that it would appear where it's shown here.

We expect to officially hear about the next flagship from Samsung in February 2020. One rumor claims the device will be unveiled at an event in San Francisco on February 18, but it may also be shown off at MWC 2020 in Barcelona a week later.