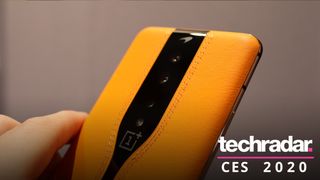 The OnePlus Concept One is a new phone revealed at CES 2020, but it's unlikely you'll ever be able to buy it.

Its innovation: tuck the rear cameras under a layer of glass that can turn opaque when you’re not taking photos so you have a slick, unbroken back of the phone.

OnePlus took the same tech that modern cars use to make their sunroofs transparent and built it into the back of the Concept One.

Put simply, when the camera app opens, the phone runs current through the glass to make it transparent; at all other times, it clouds over to hide the lenses.

This Electrochromic (EC) glass isn’t too novel - it’s also used in bullet trains and the windows of Boeing airplanes - but the real challenge was to make it small enough to use in phones. The Concept One’s EC-containing glass is only 1.3mm thick.

Because that glass is so untested, don’t expect the OnePlus Concept One to be a phone you can buy. It's also unlikely that EC back will be a feature that appears on this year’s OnePlus 8 or other flagships.

But from what we've seen the glass seems to work well, and switches over from opaque to transparent very quickly (in 0.7 seconds, according to OnePlus).

The effect is cool; the utility seems less crucial than other refinements that could truly elevate OnePlus phones, like improving its camera or making the glass atop the front-facing camera switch on and off.

That’s an even more unlikely achievement given the extra difficulty to account for the display.

But OnePlus is considering this more a proof-of-concept to prep for a future where you don’t want to hide three rear lenses - you want to hide seven or eight. Consider the mixed response to the spider-eyed lens septet on the Nokia 9 PureView.

OnePlus saw skepticism and ridicule of such phones with overstuffed camera clusters - the EC glass, then, is a way to future-proof their handsets to avoid a similar fate, but taking such preventative measures is hard to argue with. It all comes down to aesthetics, especially since the phone hasn't been improved over recent models.

And it works: the lenses disappear, and what we’re left with - at least in this model - is a lean rear glass strip sandwiched between papaya orange-color leather. It's also a McLaren edition branded version of the phone.

Admittedly, it’s a little tough - the glass is the only real difference here - but there are a couple things you can do with a variably translucent layer in front of the cameras: the phone can incrementally change how see-through the glass is, effectively introducing an organic ‘filter’ that changes how photos come out for a different synthetic look.

It might not be the most desirable effect folks are looking for, but it’s certainly different than other phones.

Thankfully, it doesn’t seem this new glass rear cover combination (glass to an indio ten oxide coating to electrochromic glass, and back out again) is extensively pricey, nor does it drain battery to tinker with the translucency - the only thing holding it from production seems to be its need for extensive testing.

If or when that comes true, future mainstream OnePlus phones may have something that most phones don’t. It probably won’t be a killer feature, but it will set OnePlus phones apart from the competition. Especially if that variably translucent glass expands over the front-facing camera.