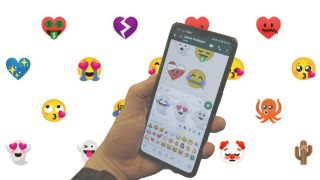 An example of how you make custom emoji on an Android phone
(Image: © Google / TechRadar)

One of the best recent developments on Android phones is the ability to mix together two emoji to send to people – the feature blows wide the amount of emoji available at your disposal, so you can express yourself in plenty of new ways.

You can match up, say, a ghost with a robot, or a heart with a bandage, or a heart with a puppy. The feature, or Emoji Kitchen as Google calls its new invention, doesn’t extend to all emoji just yet, but it could expand in the future.

Well, when we say 'recent development', the custom emoji feature is just a beta right now, so it’s a little hard to activate if you don’t know how. We’ll walk you through how activate Emoji Kitchen, and how to make a custom emoji on your Android phone.

How to activate Emoji Kitchen

This should go without saying, but to get Google’s Emoji Kitchen on your Android phone, you actually need an Android device. Sorry iOS users, but you’re going to have to miss out on this one.

At the moment, the only way to activate Emoji Kitchen is to join the beta program. You can do so by heading over to the Gboard Beta page, and selecting to join the scheme.

Next, head to the Google Play Store on your smartphone, and download or update the Gboard app. If you’ve joined the beta scheme correctly, you’ll be given the option to update. This shouldn’t take long, so you don’t need to set aside an afternoon for it.

Now, you’re ready to head into an app and start sending your creative mash-up emoji.

How to send a custom emoji on your Android phone

It’s worth pointing out that, at the moment, not all apps support custom emoji. The big ones do, like WhatsApp, Facebook messenger and Google apps themselves, but we tested our texting app, Instagram, and Slack to no success.

To send a custom emoji in a compatible app, first open the Gboard. You can do this by pressing the blue smiley face to the side of the space bar on your phone’s keyboard.

You should notice a bar between the text insert box and the row of emoji saying ‘Tap an emoji to get suggestions’ and that’s how you should know the feature is working properly.

Now, just select an emoji to see a list of other possibilities pop up. There’s no apparent rhyme or reason as to why these particular mash-ups appear, but it’s possible it’s based on your emoji history.

From our testing, we found that there were quite a few emoji with no combo options, as the ones that did have options were the typical yellow smileys (as well as certain animal, ghost and robot variants), so the possibilities aren’t quite endless right now.

But given the limited number of compatible apps, we’d expect Google will increase the available options of emoji, as well as apps, when the feature rolls out of beta testing.