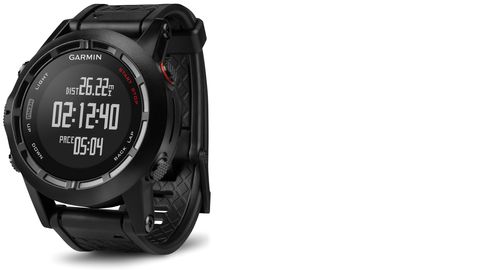 It's for trail running and the more serious pavement pounder

If you can pick this up at a discount once the Fenix 3 arrives, or are a trail runner who prioritises features over usability, get stuck in. If not, there are better running watches out there for the same price or less

Garmin is a big player in fitness wearables. In the basic tracker market, its Vivosmart is basic but still a cut above most rivals. For more serious runners, the Forerunner 920XT is seriously attractive. The Fenix has more in comparison with the latter, but with an emphasis on rural trail running rather than urban pavement pounding.

In fact, Garmin's marketing blurb describes the Fenix 2 GPS running watch as "for the casual runner and the demanding trail runner," which in reality are two, very different markets. But as with the original Fenix, the price – currently £299 – tells its own story: this is not a product for a casual runner, this is a thing for a Mo Farah-thin, serious mile muncher, for whom a metre's altitude difference and a second-a-mile are significant. That's fine, and the Fenix's feature set backs this up, but this is no casual running device.

Strap this to your wrist and it's immediately painfully obvious that you'll only be donning this for sport. It's large. All the better the chatter to satellites with, clearly, but only The Rock could maybe carry this off with a suit and not look ridiculous. Vladimir Klitschko maybe. The nicest thing we can say is that it looks like a G-Shock on a couple of buckets of whey protein.

More importantly, the menus are as clunky as the watch's aesthetics. There are five buttons: start/stop, back/lap, down, menu/up and light. With these you delve into confusing menu trees that would have Jonny Ive hugging himself and rocking back and forth, sobbing quietly. This is not a piece of tech that you'll be zipping through moments after your unboxing. There will be much staring and frowning at instruction manuals ahead.

Plus, the display is a deeply uninspiring monochrome LED. With a weak light that rolls its eyes and begrudgingly adds 10% more brightness, like a sulky teenager.

The Fenix will happily function as a stand alone fitness tracker, but you'll get the best out of it by synching it to one of Garmin's two complementary apps: Garmin Connect Mobile or BaseCamp Mobile, for fitness and navigation respectively.

Connect saves your workouts and GPS routes, storing activities, courses and workouts and linking to friends' accounts for challenges and leaderboards. BaseCamp shares your GPS routes and tracks, overlaying it onto maps with your fitness stats also shared.

The Fenix will also play nice with MyFitnessPal to track your daily activity for an accurate calorie count while MyFitnessPal tracks your calorie intake, linking the two apps for exhaustive results. Sadly, Connect seems to take its cue from the watch, being counterintuitive and confusing.

This is where the Fenix shines. Hitting the menu button cycles between displays showing ambient temperature, barometer, altimeter, compass and time – an impressive smorgasbord of sensors that spanks many comparably-priced trackers. It'll also work as a conventional GPS router, although inputting destinations and maps is sufficiently confusing that you're better off using your smartphone.

The Fenix also works as a stripped down smartwatch, once paired with your phone, buzzing up notifications of emails, texts and messages, which you can read with a button press. The down side of this is that having Bluetooth running constantly in the background shrivels the battery life from "weeks" to "Moto 360". So you can only use this as a smartwatch if you're happy recharging it daily.

But this is first and foremost a fitness tracker, and it will track road runs, trail runs, bike routes, swims, ski runs, workouts, indoor and multisport workouts with aplomb. Link it to an ANT+ compatible heart rate sensor (Garmin's own, at £80 adds an accelerometer to add cadence, vertical oscillation and ground contact time) and it'll track your heartbeat at the same time and at the end of your workout provide an exact recovery time, including a countdown until it's optimal for you to attempt another workout.

The only issue here is that the Fenix 2 can only talk to one Bluetooth source at a time. So if you've synced an ANT+ sensor, you can't sync to an app, and vice versa. Also, if you've got Bluetooth set to "Connection in activity" – recommended for battery life – it only communicates via Bluetooth during the activity and exits as soon as your run's finished, so doesn't sync results to the app until you connect for your next run.

It'll track ski and snowboard runs using the altimeter and barometer alongside hiking, biking and swimming – pool and open water. You can even download custom workouts from the web and sync to your device using the app. Basically, if it involves you pulling on some tight sports equipment and raising your heartrate above "sofa", this watch will track it.

If you're a serious runner, then you'll be morbidly obsessed with VO2 max. This is the maximum volume of oxygen (in millilitres) you can consume per minute per kilogram of body weight at your maximum performance. And the Fenix is your VO2 max friend, linking with a (mandatory) heart rate sensor and a user profile you'll have to set up, it judges your VO2 max fitness on a five-point scale: poor, fair, good, excellent, superior. The more data you input, the more accurate the rating, which also works for the recovery advisor.

After you've clicked it into the supplied charger and juiced it up, you strap the Fenix on with the comfy and wide polyurethane strap, and lo: it feels snug and secure. At 91g, it's twice the weight of comparable trackers from Polar and also Garmin's own Forerunner 620. At the start of short runs this is negligible, but at the end of long stints, you might begin to feel its weight.

You may as well begin your warm up lunges while it's searching for satellites, too, as you're going to be here some time.

However, once you're connected, the performance is pretty flawless. The GPS signal is rock solid and secure – I never experienced a single drop-out.

Do your run/swim/hike/snowboard and you'll be bombarded with all the stats you could wish for, going into almost insane detail. If you're serious about fine-tuning your fitness through the minutiae of stat crunching, this is the product for you.

The Fenix 2 is a potentially great product that's hamstrung to an extent by a clunky and anachronistic UI and uninspiring screen. Battery life is immense, and the function set is all but exhaustive, but trying to use any of it feels like taking an exam, and the apps you sync it to are uninspiring.

The huge feature set and plethora of sensors, allied to rock-solid GPS performance (once it's locked on) and impressive battery life (so long as you don't squander it on smartwatch-style notifications over Bluetooth) make this a cracking watch for those who like to run on the wild side. For road running, we'd never choose it over a Forerunner 920XT, however.

It feels overpriced, especially given the clunkiness of the interface and apps, and the screen should really be more bright and legible in the great outdoors, given that's where it's designed to go.

As we're catching up a bit on our fitness watch reviews (we'll be more up-to-date going forward, promise), the other thing to bear in mind here is that the Fenix 3 will be out early in 2015. Hopefully it'll correct some of the interface issues and address the limitations of the watch's OS.

Conversely, it may also mean that remaining stocks of the Fenix 2 come down in price, and if you end up being able to pick it up for around £200, we'd feel a lot more able to recommend it. There's a hardcore of trail runners who'll love this regardless of our quibbles, but for us, this adds more pain to our workouts than we're comfortable with, even if it does track them immaculately.