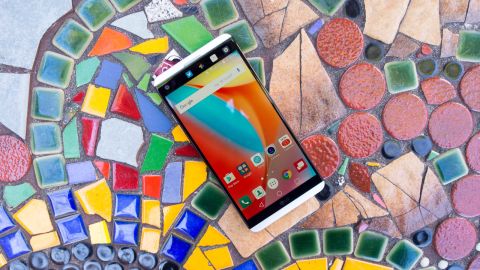 The LG V20 is the first Android smartphone outside of Google’s family of Nexus devices - and the new Google Pixel - to receive Android Nougat. As such, the multi-window feature, as well as the improved Doze functionality for battery life savings are available out of the box.

LG’s latest also features Google’s new In Apps search. The function operates a lot like Apple’s iOS search does: combing through your contacts, apps, messages and the web to help you find what you’re looking for. In short, it’s handy, clean, and should’ve been a part of Android a long time ago.

This phone runs with LG’s new UX5.0+ software on top of Nougat, and is an updated and slightly more refined version of what’s found on the LG G5. LG provides three different home screen options: two of which feature the app drawer and one that doesn’t.

As far as what Android Nougat offers up with the LG V20, it’s more or less just as it is on the Nexus 6P: fast, but with a thick interface layered on from LG. There’s an LG-flavored setting, app or shortcut to be seen at nearly every turn. Some of them are super useful, like the QuickRemote app that can essentially turn the V20 into an all-in-one remote for all of your entertainment devices. QuickMemo+ app - a Google Keep-like app, is also handy. We loved comfort view, a mode that turns the screen a hue of calm yellow instead of the harsh blue that can make falling asleep difficult after use.

Its Smart Bulletin feature is particularly handy as it occupies a home screen slide and smartly aggregates all of your to-dos and calendar events in an easy-to-digest manner. Lastly, users will appreciate the knock-to-wake and knock-to-sleep function, as well as the fact that the music app allows users to send music wirelessly to an Android Wear device. If you do find yourself using LG’s collection of apps, your bases will be covered.

However, people who have an allegiance to a set batch of apps likely won’t be lured by LG’s suite of basics, especially its messaging app, Calendar and e-mail substitute.  Its SmartWorld app is a lot like Sony’s Xperia Lounge: a portal for exclusive wallpapers, font types, ringtones, and not a whole lot else.

Another thing worth noting: if you purchase the LG V20 through a carrier, you can expect to be met with a ton of bloatware - about 2GB worth. For example, Verizon has loaded the device up with its own messaging app, a collection of account management apps, as well as Kindle, Audible, IMDB and a few games. These can be removed from the home screen, but unfortunately, not uninstalled.

Lastly, we’ve noticed in comment threads that many people have encountered a boot loop issue with previous LG smartphones. I’ve you’ve been affected in the past, you’ll be pleased to know that we haven’t run into a single occurrence across three different LG V20 devices.

Multimedia know-how sits at the top of LG V20’s book of tricks. Focusing on music, this smartphone is stocked with more hardware than most. For starters, it has a 3.5mm headphone jack. It also has a toggle-able Hi-Fi audio mode that takes advantage of four digital-to-analog converters (DAC) powered by the ESS Sabre ES9218 to elevate the listening experience to new heights.

The tech makes even MP3s sound super-charged with depth and attack, and FLAC files sing as beautifully as you’d expect to hear out of a dedicated audio player, not a smartphone. Of course, you can choose not to use the DACs, but why would you do that?

The V20 is also stocked with a setup to let you relive your favorite concert recordings or personal jam sessions in high fidelity. With its three microphones, this smartphone can record in LPCM  - a 24-bit audio format with up to a 48kHz sampling rate - alongside your video. If you’re recording strictly audio, it can record to a 24-bit FLAC file with a sampling rate of 192kHz. It’s empowering to not only have a device that can play lossless files, but one that can record them, too.

Here are a few audio samples that we recorded. Obviously, the FLAC files have been compressed, but the three-microphone setup still shines in the recordings.

If you’re watching a movie or playing a game, you’ll be in for a treat with the 2,560 x 1,440 QHD IPS display. It pops with vivid color and crisp detail, both outdoors and indoors, and the second screen can keep you abreast of notifications while you’re enjoying a diversion. LG even included the ability to tweak the color temperature of the screen to make things easier on the eyes during extended use. One disclaimer: the V20 features a bottom-firing speaker grille, but it sounds rather uninspiring.

To top things off, LG is offering a complimentary set of headphones along with the V20 purchase for a limited time, the Band and Olufsen H3. Compared to normal pack-in earbuds, these are a huge step-up in quality and really help to show off the benefits of its DACs. Surprisingly, the V20’s hardware can make music sound better even with low-tier headphones you might already own.

Now, since LG’s runs Android Nougat, the topic of Google Daydream VR was bound to come up soon enough. Unfortunately, we’re still waiting to hear an official word from LG as to whether the V20 will support the new VR platform. It simply told us that it is being investigated.

The LG V20 is a design departure in more ways than one from the LG V10, and it has received a slight shake-up in terms of its spec sheet to mark the occasion, too.

Its chipset has been upgraded from the Snapdragon 808 to the Snapdragon 820, bringing the Adreno 530 along with it for the graphical duties. Unfortunately, it just missed out on the Snapdragon 821 chipset, which we’re seeing pop up in the Asus ZenFone Deluxe 3 and Google Pixel.

Just like we saw with the V10, the V20 runs with 4GB RAM, a count that should keep things running smoothly well into the next generation of mobile games and applications. Some more good news to consider here is the support for the cross-platform Vulkan API, which will usher in “console-quality” graphics to the mobile space.

The V20 doubles the V10’s baseline amount of onboard storage to 64GB and kept the microSD slot for additional storage. In terms of connectivity, you have the latest Wi-Fi AC protocol supported out of the box. There’s also Bluetooth v4.2, NFC for Android Pay and, as previously stated, USB Type-C for charging.

LG’s dual-screened phone is as snappy as we hoped it would be, delivering a consistently smooth experience. Even with its two screens, high-end audio hardware and wide-angle camera features, it doesn’t miss a beat multitasking between apps and games.

In GeekBench 4, the V20 rated highly amongst the competition. Compared to the Snapdragon 821-toting Google Pixel that earned a multi-core score of 4,029, LG’s latest earned an average 3,821 - a number that’s in the neighborhood of what the similarly-specced Samsung Galaxy S7 can put out.