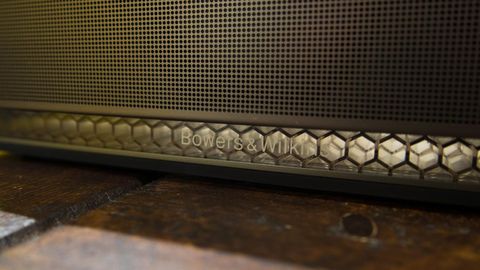 Audio aficionados will enjoy the well-rounded experience offered by the T7, but casual listeners will find a better value elsewhere.

The T7, the company's only Bluetooth speaker available, has the chops to pump out your music a little better than you've heard it before, depending on your exposure to high-end gear. It definitely looks better than most speakers do, but it all comes at the expense of, well, expense. At $349 (£299, about AU$440) does Bowers and Wilkins flagship Bluetooth speaker sing to a truly exquisite tune?

It's difficult sometimes to unearth the inspiration for a product's design, as it usually comes from not just one, but several places. But for the T7, to me, it's rather obvious. It's a carbonized bee hive and the speakers are its delicious honey.

About as tall as a VHS tape (though twice as thick and way more dense), the T7 is pretty weighty, comparable to an Ultrabook. It's a benefit in this case, as this speaker's orientation is horizontal only, so you won't have to worry about the speaker tilting over.

The hardware is enclosed in translucent polycarbonate that's reinforced with an entrancing honeycomb design. I'd like to think that, for the price, it's more than just flair. To Bowers and Wilkins, it certainly is: the design is said to reduce vibration and distortion. We'll see if it makes a huge difference later on in the review.

Wrapped around the perimeter of the T7 is a band of rubber. On the top, you'll find the media controls. All of the usual inclusions are here: Bluetooth discovery, play/pause, volume up and down. On the side, we have the power button and white battery indicator LEDs.

There's yet another cool design marking on the front and back of the speaker. While the speakers are enclosed in the honeycomb-laced polycarbonate enclosure, they breathe through polished metal grilles that jut out on each side about a half inch.

The sound quality of Bluetooth speakers can be a tricky thing to judge because it changes drastically depending on the room size. For example, sound from a tiny speaker (even the iPhone's built-in speaker) that can't fill a studio flat can warp into something passable once you place it in a bathroom.

The T7, as Bowers and Wilkins put it, is perfect for bedrooms, kitchens and gardens. So, I used it as my music buddy to accompany me through dish and laundry duties. While I can say that the T7 sounds good, great even, I cannot say that it sounds fuller, or to come right out with it, much better than other speakers that aren't as pricey.

Don't doubt that the T7 won't provide some truly ear-opening details in songs you've never heard before. There was a layer of delicate and moving guitar strumming I had never noticed before in "Demons" by The National. It was usually lost in the clumpy sound expression of other speakers, but the T7 plucked it right out.

The rechargeable lithium battery performed better than expected. For a device with two 50mm speakers and two bass radiators, I was anticipating battery life that was short. Fortunately, music kept on coming strong for about 16 hours at a mix of volume levels. I encountered no issues with Bluetooth connectivity.

Design meets performance in near-perfect harmony. From the honeycomb design that trims the face of the speaker to the charming Bluetooth sync jingle, I appreciate the stunning workmanship Bowers and Wilkins applied. The T7 is a durable, long-lasting and complete looking and sounding product.

This device has a lot going for it, but only one big con might keep it from finding an owner who's an average person with an average budget: price. It's $349, which is a serious investment. As much as it tries to convince you that it's worth it, products like the Harman Infinity One rock the house louder and offer a better value (not to mention a microphone and NFC) for $50 less. At $249, the T7 would be a decent deal, but the extra amount tacked on seems attached to the name and legacy.

The sound and design quality is among the best that Bluetooth speakers can offer, but Bowers and Wilkins can't compete with cheaper, more powerful options in terms of sound reach and value. Lacking extra features like NFC-connectivity and a built-in microphone hurts it too.

As a standalone speaker, it's a fantastic, but expensive option. The Bowers and Wilkins T7 falls just beneath the standards I hold for today's Bluetooth speakers.