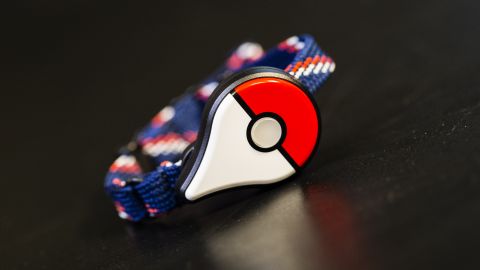 As it stands, the Pokémon Go Plus feels like a frustrating way to play Pokémon Go, and in most cases it's simply easier to open the app itself.

Pokémon Go was a phenomenon when it launched earlier this year, but the release wasn't without its problems.

Once people got over the server issues and frequent game crashes, they discovered that the game's combination of GPS tracking, internet connectivity and 3D graphics meant that it positively ate through a phone's battery.

At the very least, the Pokémon Go Plus, which is a wearable that allows you to play the game from your wrist, should allow you to play Pokémon Go for marginally longer without having to resort to an external battery pack.

But anyone expecting a more substantial improvement to the game will be disappointed. The Pokémon Go Plus wearable is light on options, and the amount of attention you have to give it means that it's not a whole lot different from using the app itself.

The best place to buy the wearable at the moment is from your region's Official Nintendo Store, since there are a lot of resellers on sites such as Amazon charging almost double the recommended retail price of the device.

The wearable itself is surprisingly big, measuring 33mm wide by almost 44mm long. Out of the box the device is set up with a small clip to allow it to be hooked onto a shirt pocket or belt.

If you want to use it with the band featured in the promotional shots you'll have to unscrew the back clip and screw on the band-equipped back. This is the same way you get access to the device's battery, which shouldn't need replacing too often thanks to the low-power Bluetooth protocol the device uses.

In the center of the wearable's face is the device's sole button, which doubles as an indicator light.

The process of pairing your Plus to your phone is fairly easy.

Once you've made sure the app has been updated to its latest Plus-supporting version, turn on your phone's Bluetooth and simply go into the app's settings to find the Pokémon Go Plus menu.

Once here press the button on the device itself to put it in pairing mode, and then select it from the game's menu.

After this point a small Pokémon Go Plus wearable logo appears on the game's main screen, and you can pair or unpair the device by simply pressing this logo and then pressing the button on the device.

It's a well thought out process, and meant that we were able to quickly get the device paired when we wanted to pop out for a quick Poké-stroll.

Using the Pokémon Go Plus wearable you can do most of what's possible in the app, but not everything.

You can activate Pokéstops and catch Pokémon, but you won't be able to battle at gyms.

Contrary to what we heard prior to the device's release, you can in fact catch new Pokémon using the device.

Blue flashes say you're near a Pokéstop and green tell you there's a Pokémon available to catch.

You then press the flashing button to interact with the object in your environment, and the device will flash to tell you if you've been successful or not.

When catching a Pokémon the light will flash white three times before either doing a multi-colored flash to indicate success or flashing red to indicate failure.

If you want to see what you've actually been doing in the game you can check your journal, or alternatively your phone will display a notification after each event, telling you what you've gotten from a Pokéstop, or which Pokémon you either have or have not managed to catch.

One of the biggest problems with the device is the lack of information you're given while you're actually using the device. With no way to know which Pokémon you're coming across, it's totally possible to miss out on some good catches.

We missed out on multiple rare Pokémon while using the device.

The usefulness of the Pokémon Go Plus depends entirely on what you're trying to achieve in the game.

If you're going on the hunt for new Pokémon, then the device doesn't offer you much help since there's no way of checking which Pokémon are nearby (but then again the nearby tracking functionality is still absent from the game itself).

Likewise, if you're looking to battle at gyms then the Plus won't help you out because that's functionality that you can only access through the app itself.

We'd love it if the device was something we could put on and forget about, allowing us to rack up the miles on our eggs while going about our day, but the amount of notifications the Plus gives you means that it takes up almost all of your attention while you're using it.

It would be nice if you could put the device in some kind of distance-tracking-only mode to let you work on hatching eggs without being bothered by other notifications, but the device is very much a one-mode-only wearable.

It's worth noting that the wearable doesn't contain a GPS tracker of its own, and so problems with distance tracking within the app unfortunately remain when using the Plus.

With the low power Bluetooth protocol used by the device, it's lithium watch battery has lasted a significant amount of time.

But we were more interested in how the Plus reduces the app's strain on the phone's battery life. The app's combination of GPS tracking and 3D graphics meant that an external battery pack was an essential part of any Pokémon trainer's arsenal.

These problems are not completely solved by the Plus. The phone still has to use its own GPS, and additionally has to communicate with the device over Bluetooth.

But the most battery-intensive part of any phone is the screen, and by using the Plus wearable you can avoid having to use the phone's screen at all while you play.

So while your battery life will still be impacted by playing Pokémon Go, it shouldn't be nearly as bad when using the wearable.

The wearable itself is well-designed. It feels solid, and the all-in-one button/indicator light is solidly implemented.

The Plus might not give your phone the biggest improvement in battery life, but it's helpful all the same.

It's nice being able to play Pokémon Go without having to constantly have your phone out, but you'll have to make a few trade-offs in order to be able to do so.

When you're using the Pokémon Go Plus, you're neither playing the game in the background, and nor are you fully engaging with the experience.

You're not playing the game in the background because the Plus is almost constantly buzzing with activity when you're playing with it. You have to give it almost as much attention as you'd give to the game itself.

But at the same time, you're not fully engaging with the game because you're unable to plan your route to hit Pokéstops, and being unable to see which Pokémon you're encountering means you can't put any extra effort in to catch them.

It's an awkward halfway house, and it's meant that when we want to play the game we'd much rather use the app itself.

One of the biggest problems with Pokémon Go at the moment is the grind. You have to catch dozens and dozens of Pokémon in order to acquire enough candies to evolve them into something new.

The Pokémon Go Plus works should be a fantastic means of reducing this grind. You should be able to put it on before going for a walk and pay it minimal attention.

But the fact is that with the amount that the wearable demands of your attention with its constant buzzing then you might as well just be using the app where you'll be able to choose to dedicate more powerful Pokéballs to it for example.

Ultimately, if you want to play Pokémon Go, then in most cases you're better off using the app itself and playing the game properly.