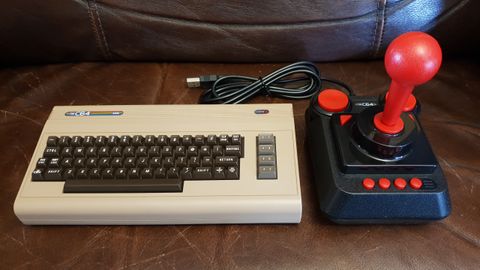 While the prospect of a return to the glory days of Commodore 64 gaming is initially very appealing, that excitement quickly turns to frustration thanks to The C64 Mini's unresponsive controller and the realisation that most of its games have aged poorly.

If you grew up in the early to mid 1980s, chances are that you (or someone you know) had a Commodore 64 computer. Not only was it one of the first machines on the gaming scene, it was one of the first mainstream personal computers, period.

Along with the ability to load up video games via cartridge, floppy disk and cassette tape, the Commodore 64 would also allow users to run BASIC and even program their own games and applications if they were so inclined.

Now, the Commodore 64 experience is back, thanks to the C64 Mini — a retro console that may not officially bear the Commodore name, yet still carries all of its heart.

Featuring 64 built-in games, the C64 Mini's library is but a mere drop in the ocean compare to the thousands of games that released on the platform. Thankfully, this crowd-funded replica will also run Commodore 64 ROMs, albeit via a process that's as far from user-friendly as can be.

If you've played the Commodore 64 before, you'll probably already know whether the C64 Mini is going to appeal to you. However, the real question is whether that rose-tinted nostalgia is enough to justify its $79.99 (£69.99 / AU$149.95) price point.

Upon unboxing the C64 Mini's box, you might be struck by how adorable the miniature retro console is. Looking just like a scaled-down Commodore 64, the C64 Mini sports the same beige coloring and keyboard layout as the original unit.

Unfortunately, those keyboard keys are completely non-functional – they don't budge if pressed – and you'll have to plug in a separate USB keyboard via one of the C64 Mini's two USB ports, or use the system's virtual keyboard, in order to work proficiently in BASIC.

Like the NES Classic and SNES Classic Mini consoles, the C64 Mini is powered via micro-USB — a cable is included in the box, though you'll need to provide your own AC adapter (your average smartphone charger will do the trick).

Along with its included micro-USB cable, the mini computer also comes with an HDMI cable, allowing you to output video from the device at a maximum resolution of 720p. Don't worry – this is more than high enough for these kinds of games.

On the right side of the machine, you'll find the C64's power button, which is the only pressable button on the console. Simply pressing the button once doesn't seem to do anything, though – you'll have to hold the button down for a second for the C64 Mini to power up.

While the console itself seems to have been built with great attention to detail and a heaping helping of love, the C64 Mini's accompanying joystick controller is fairly underwhelming.

In use, the joystick feels very stiff and immovable and while your movements will mostly register on screen, it just doesn't feel that way in your hand. Moreover, while there are a total of eight buttons on the controller, many of them don't really seem to do anything.

Up top, you have the joystick's two main buttons, which feel spongy and unresponsive to press. To the immediate upper left and right of the stick, there are two buttons which didn't seem to provide any functionality in any of the games we played for this review.

Along the bottom of the joystick is a row of four buttons — the first one acts as a start button of sorts, while the last one is used to bring up a number of actions, including the ability to save or load you game (which can be done at any time), launch the virtual keyboard or exit your current game.

At 1.5 meters (just under 60 inches), the joystick's USB cord is a decent length, although unless you're planning to sit on the ground in front of your television to play, you're probably going to have to invest in an extension cable.

Upon booting up the C64 Mini, you'll be greeted with a number of language options. However, the next screen after this will be very familiar to anyone who's played with a NES Classic or SNES Classic Mini console.

Listed horizontally, each of the mini computer's 64 included titles are presented with accompanying original box art and a blurb about the game.

Here, you can use the joystick to scroll through the seemingly endless selection of games that are listed alphabetically, one of which lets you launch Commodore 64 BASIC, and another of which launches an applet which displays a thank you to each one of the backers from the C64 Mini's crowd-funding campaign.

Surprisingly, there are loading times which accompany the launching of each game on the C64 Mini, with some games taking longer to boot up than others. Thankfully, the wait time is nowhere near that of the original Commodore 64, where games on cassette tape sometimes took several minutes to load... in some instances, only to fail at the last second.

The games themselves look  better than ever here, with their simplistic 8-bit graphics looking sharp and clean — even when played on a mammoth 65-inch TV.

While 64 titles is a large number to choose from, there were thousands of games released on the original Commodore 64, so it's  likely that many of your favorite games from that era are going to be AWOL.

It's great to see classics like Impossible Mission and California Games readily available, although other Commodore 64 favorites, such as Skate or Die, Barbarian and Spy vs Spy would've perhaps been even more welcome.

On top of this, there are no game manuals included, so some of the games are bound to be utterly baffling to those who are unfamiliar with them, or haven't played them for multiple decades.

Thankfully, the C64 Mini is able to run Commodore 64 ROMs right out of the box via its USB port, however the process of getting these going isn't particularly user-friendly. First, you'll need to acquire said ROMs, which must be the correct file type (.d64) and must also be saved to the root folder of a FAT32 formatted USB drive.

The ROM file will also need to be renamed (THEC64-drive8.d64), meaning you can only have one active ROM on your USB drive at any given time. While you can get around this by moving ROMs in and out of a sub folder on your USB drive from your PC, but there's no denying that this is an annoying and limiting hassle.

Just like in the old days, to start a ROM you'll have to load up BASIC and type out a command to load your chosen ROM (LOAD"*",8) and then another command to run it (RUN). If you have a keyboard connected, this shouldn't be too hard to do, and you can also use the C64 Mini's virtual keyboard to do this (slowly) via the joystick.

While a great deal of care and attention to detail has gone into the creation of the C64 Mini, we can't help but consider the retro console as something of a missed opportunity for fans.

On the one hand, it's cool that you can load up BASIC and use the C64 Mini as a functioning (albeit limited) computer. On the other hand, its approach to ROM loading, authentic as it may be, feels especially antiquated in 2018.

We'd have much preferred an all purpose built-in emulator on the device that would allow us to instantly load up hundreds of games from a connected USB drive without having to jump through a bunch of time-consuming hoops.

We're also disappointed by the C64 Mini's joystick, which feels cheap and unresponsive. Many of the included games haven't aged very well, and the disappointing controller only hampers the gameplay experience further.

Still, there's no denying that the mini computer itself is incredibly cute, and if you're simply looking for a collector's item that reminds you of the good old days of 8-bit gaming, there is some enjoyment to be had with the C64 Mini — just don't expect to be playing it very much once that initial rush of nostalgia has worn off.