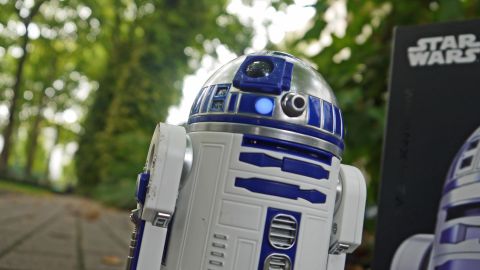 Sphero does it again with its latest launch. It's packed its R2-D2 with a fantastic amount of tech and also made sure that it can move freely on your carpet!

When BB-8 was announced for The Force Awakens, it was a perfect fit for Sphero. It was a no-brainer that the company's connected toys (which just happened to be spherical) could be made to create a droid that comprised 85% round ball.

UPDATE: The ‘Watch With Me’ app has been given an update which means you can now watch The Last Jedi and other films from the Star Wars saga with BB-8, BB-9E, R2-D2 and R2-Q5. If you haven't done this before, then do! The droids react to events in the movie with animations and sounds, as well as each other.

Since the original BB-8 release, however, Sphero has branched out beyond the ball with a number of releases that have the AI smarts you've come to relate with the company - including a Amazon Echo-like Spider-Man and a Lightning McQueen connected remote-controlled car from Cars 3 - but don't rely on being round.

We've been using (playing, lots of playing) with R2-D2 for a few weeks now and the results are impressive. Most impressive.

If you have used any Sphero product, you know what you are getting with the Sphero R2-D2.

R2-D2 moves in a different way from other Sphero droids. This is because he uses his trusted tracks to get along. He is controlled in the same way, however, and that is through the dedicated app.

Having tracks does make Artoo a little slower than the other Sphero toys but it also means that controlling it is a little easier. The tracks work really well on carpet, too, so R2-D2 should be able to move freely as long as your carpet isn't too thick and shaggy.

Not being restricted to a ball shape has also meant that Sphero has been able to add a little more detail to R2-D2's chassis. Scrap that: it's added a lot of detail. This is a perfect replica of Artoo; the ultimate shelf buddy that just happens to do heaps, too. The only caveat is that it is a bit too plasticky. It doesn't feel like it's going to break at any point but it certainly doesn't as solid as other Sphero products.

Anyway, more on the nice touches: It's little things like the inclusion of some rubber 'hydraulic' foot cabling at the bottom and a retractable third foot that really make the 'bot.

The Sphero R2-D2 stands tall, at 17cm (around seven inches). And despite not feeling as solid, it's quite notably heavier, at 370g, compared to 200g for the other Sphero droids.

Start it up and it's R2-D2 through and through. Its mannerisms are identical and the sounds it makes are completely authentic. It's brilliant.

Sphero explained to TechRadar that it went to Skywalker Sound to get the original recordings of R2-D2 in Star Wars: A New Hope and used these as a basis for its bleeps and bloops. It's all about the detail.

Controlling the R2-D2 is the same as all other Sphero products, through a dedicated app. A new app has been created - called Droids by Sphero - so that all your Sphero droids can be controlled from one place.

When we initially reviewed the Sphero R2-D2, it didn't have Force Band compatibility. But now thanks to an app update, you can now use the Force Band accessory to control Artoo.

This is a real help as it's likely that fans of Star Wars will want more than one droid to play with.

As with the other droids, you get a virtual d-pad to control Artoo. The d-pad now moves to where your thumb is on the screen, which is a real boon as it makes controlling so much easier.

There are some lovely one-touch gesture flourishes in the app which are kind of like special moves.

These are shown as images on the right-hand side of the app and include a 'freak out' moment, Artoo speeding away and you can have him chatting to you as well.

R2-D2's head moves, too, just like the other Sphero droids but it's not detachable. It does have his front and rear LED lights, though, to add to the authenticity.

The AR mode is fun but needs work. The idea is that you can venture around the Millennium Falcon by pointing your handset at different areas around the area you are in. When you move the handset, Artoo's head moves with it so there is interactivity of sorts. It's great to see a number of recognisable parts of the Falcon - it even has the holo chess.

But it's a little fiddly and the game to collect certain information orbs won't keep you interested for too long.

Mapping out a route for R2-D2 is a simple process. Just use your finger to create a pattern and the droid will follow it. It's great to see R2-D2 go and do its own thing. So much that it would be nice if there was a little more of this, maybe a demo mode or something so it will still interact with you even when you aren't using the accompanying app.

R2-D2 is an impressive connected toy and one that comes to life with the more droids you have - interactivity that will only improve over time.

Whether you are controlling it, watching Star Wars with it (you can watch all the prequels, Rogue One and A New Hope and it will interact) or admiring it on your shelf, you'll enjoy the company of Sphero's latest droid.

While we would like to see a bit more interactivity when we're not actually using the droid, it's the smartest Star Wars toy we've ever played with.