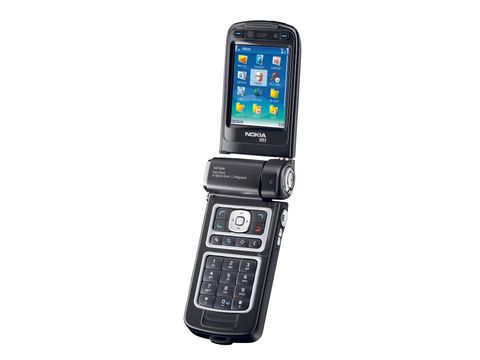 The Nokia N93 is huge in terms of weight and size.

Full marks to the Finns for pushing the photographic envelope, but they've paid a (literally) heavy price

It's a fact that getting good pictures on your cameraphone isn't just about measuring your megapixels. Sure, the number of pixels your imaging chip can resolve is an important part of the equation. But the quality of the image starts with the lens, and the types you find on most standard cameraphones simply aren't good enough for really high quality pics, in part because they're crammed into such a small space - it's simple physics.

Nokia first demonstrated this last year with the N90, which included a large camera lens grafted onto the top of a Symbian smartphone and the company plans to repeat the trick again with the N93, which includes a very high quality Carl Zeiss Vario-Tessar lens and optical zoom arrangement.

Full marks to the Finns for attempting to push the photographic envelope, although they've paid a (literally) heavy price in both size and weight.

Compared to most pocket-friendly phones, the N93 is massive, huge even. The 3.2-megapixel Carl Zeiss lens may be impressive but it's also impressively large, and doesn't appear to have been any easier to integrate than previous versions - it looks like it's been grafted onto an already chunky 3G phone body. And at 180g it's also one of the heaviest phones available.

In appearance it looks similar to the N92 but it doesn't have the N92's DVB-H TV tuner (there's a TV out facility, but that's for connecting the phone to a TV so you can show off your pics and vids).

In fact, the N93 looks remarkably similar to a compact digital camcorder with its lens arrangement sitting on top of the hinge mechanism, and pointing out from what is normally the side of the clamshell. It's no coincidence. Nokia is strongly promoting the video camera capabilities of the N93, and the device is packaged with sophisticated Adobe Premiere Elements 2.0 editing software as well as onboard imaging apps.

But it's not just the size of the lens that distinguishes the N93's camera from the rest of the cameraphone herd. It's one of very few cameraphones on the market to possess an optical as well as a digital zoom - and the only one to offer 3x optical magnification. This makes a considerable difference, since it doesn't merely enlarge the pixels of any given image, but instead adjusts the focal length of the lens to give a truer, better quality image - just like a real camera in fact.

The generously sized screen packs in 262,000 colours and measures 50x37mm. Lift the flip and twist it on its single pivot and after a couple of seconds it's in camera mode and the screen can be adjusted for viewing angle. In this mode it offers a very natural grip and makes it easy to point and shoot by pressing the button with the big red dot. The optical zoom is controlled by a thumbwheel which surrounds the shoot button and is very easy and intuitive to use.

As well as being a whiz on still photography, the N93 can also record MPEG-4 VGA video at 30 frames per second and 640x480 pixel (VGA) resolution, along with stereo audio recording and digital stabilisation - all of which makes it a pretty decent camcorder too.

You can film for up to 90 minutes (or keep 2,500 high quality pics) and store them on the phone's built-in 50MB of memory, or on a swappable MiniSD card. The N93 will accept cards up to 2GB, but it's not yet clear what memory card, if any, will be bundled with the phone.

With the N93 in either camera mode, there is a range of camera controls at the right-hand side of the screen which can be navigated by two buttons on the left, as well as the navigation pad on the side (which becomes the front in camera mode - with the screen twisted, the side-mounted lens faces forward). Settings can be preset to allow you to flick between set-up options and you can flip quickly between video and photo modes via a dedicated button on the side.

Photo options include shooting mode (automatic or night),white balance (5x options) and colour tone (4x choices). Further options include print size (from MMS style to whopping 25x20cm print size), an extended zoom, which brings in the 20x digital magnification, flicker cancellation which can be toggled between 50 and 60Hz, a range of four shutter sounds and a self-timer. The camcorder offers opportunities to merge movies, add sound, add text, cut, edit and 'create muvees' (a type of easily edited home movie).

There's a generous range of onboard editing options, including cropping, rotating, red eye reduction and the ability to add frames, pics and text. However, you can open up a whole world of video editing capabilities once you transfer footage to your PC. The Adobe Premiere Elements 2.0 package supplied also allows you to burn your films and pics to DVD.

Carrying the N93 may pose some problems, but using it is great fun. One handy way to view pics and videos is by flipping up the screen in landscape mode, so the device looks like a mini laptop - you can then browse the images, zoom and edit using the keypad and soft key controls on the screen, search the web or even watch TV via 3G. Flipping the screen up like this automatically puts the N93 into automatic 3G video call mode, and activates an additional small lens mounted just above the screen.

The viewing angle seems particularly wide too, which comes in handy if you want to share with a few mates. Video downloads and streaming are, of course, supported.

The N93 is also a full Symbian S60 smartphone, with all that that entails, including a built-in digital music player that covers all the commonly used formats (including MP3, AAC, AAC, eAAC and WMA), plus document viewers for email attachments (including PowerPoint presentations, Word documents, Excel spreadsheets, PDFs and ZIP files).

There's also support for Push-To-Talk, 3D games including N-Gage title System Rush: Evolution, which is promised to come preinstalled. There's an FM radio too, and Nokia's Visual Radio enhancement is tuned in.

Wi-Fi support is also included, and accessing a Preview NokiaN93 Wireless LAN seemed very easy - the device searches, finds, asks you to input the WEP key and you're in. Nokia supplies the N93 with its intuitive and graphically enhanced Nokia Web Browser so you get the full internet at your fingertips, and Wi-Fi neatly complements high speed 3G coverage.

There's also stereo Bluetooth wireless option as well as infrared. As well as this, you get UPnP (Universal Plug and Play) support, which will enable you to integrate your phone into a suitably equipped wireless home system, communicating with other UPnPenabled gadgets and sharing content.

Other features on this stacked device include a full suite of organizer and personal information manager options, which you can sync easily with a PC.Nokia includes its Lifeblog 2.0 software here for storing and sharing multimedia content captured by the N93.

Battery life looks promising at five hours talk time and ten days standby promised, though it's likely that extended use of functions will soon eat into that. The combination of a 3.2-megapixel camera and fancy Carl Zeiss lens make for impressive photo results. Pics both close-up and at longer range outshone any of the other cameraphones we've tried, plus the extra versatility offered by the optical and digital zooms greatly increases the opportunities for shooting.

There's also a flash, but it doesn't break with the tradition of basic varieties available on cameraphones, and isn't effective much beyond the one metre mark.

While it's not likely that anyone is going to trust their wedding video to the N93, the camcorder option could well be a boon for bloggers, especially with 3G and Wi-Fi options for fast Net access - in fact, the N93 or something very like it, could even become a standard news reporting tool for blogs and websites alike. Dave Oliver

STYLE: The N93 has a heavyweight feature count but is big,chunky and heavy with it

VIDEO PLAYBACK: ...And it can fold and rotate to sit notebook-style for desktop widescreen viewing