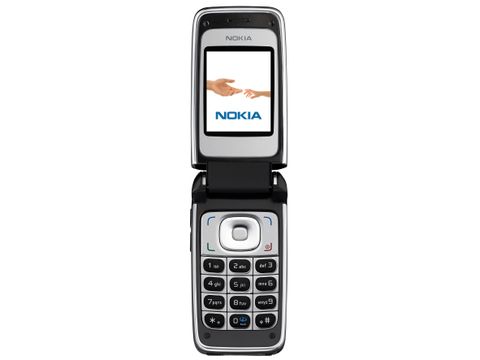 Nokia has always tried to made a decent job of being all things to all men - and women, for that matter. From unadulterated functionality and ease of use to high concept models - such as the keyless 7380 - the Finnish giant has gone a long way in covering all the bases. The real challenge, though, is to marry up these two approaches without compromise.

That means stuffing all the latest features into the smallest possible device, while keeping the menus and button layouts as simple as possible and easy to use. Nearly always, there is a trade-off but he Nokia 6111, however, has looks to kill as well as an armoury of features usually reserved for bulkier models.

The slide action on this retro looker is something not often seen coming from the Nokia stables. Indeed, it looks a bit like a hybrid between a Nokia and one of Samsung's D600 models.

It's clear that this is a phone meant for those who want an emphasis on looks rather than technology - the raft of features wrapped up under under the smooth shell exterior is accessible enough, but by no means advertised up front.

Where the 6111 shows its credentials is in the price. SIM-free, the 6111 is currently over £200, although it can be found free with some higher-usage contracts.

Apart from the unusual slide action on this Nokia, the most surprising thing about it is its size. It's especially tiny because of its pebble-like rounded edges. For many women with smaller hands and the need to fit a phone in a handbag or tight-fitting pocket, the 6111 presents a very attractive proposition.

Sliders can be a bit tricky to use if they haven't been designed well. The point is surely to get rid of the number buttons except for the times when you really need them - which is usually when writing texts, as people generally have numbers stored in their contacts nowadays.

Basically, you should be able to use most of the phone's features without having to open the slider at all. The 6111 manages this well, as the buttons on the outside include the four-way rocker and OK command, plus the buttons for making and taking calls, and the two softkeys for menu-browsing.

This isn't to say you won't want to open up the 6111, however. The spring-loaded slide action has an especially satisfying feel to it which becomes addictive after a while. The metallic trim inside is a winner too and the lustre on the piano-black finish (which our sample came in) is pure class.

The action of the buttons isn't similar to many other Nokia models we've looked at - and some may not like the difference - but this is certainly a new and welcome breed of Nokia.

The main attraction on the outer face of the 6111 is the screen. This is a 262k-colour capable affair, with 128x160 pixels. It's nice and bright, and the colour rendition shows up snapshots taken with the camera to great effect.

The camera is a megapixel model, which is surprising in a phone this small. Snaps taken with the 6111 are easily good enough to show up the highlights of a holiday or a night out, and benefit from a comprehensive array of effects, including a bright LED flash and 6x digital zoom. An especially good feature is the landscape mode, meaning that shots taken sideways get turned the right way up automatically. The lens also takes decent quality video footage in the 3GP format used for multimedia messaging.

Multimedia messaging is fully supported on the 6111, for sending pictures and video of up to 10 seconds in length, but there are other ways of sending media. If you want to get full quality images off the phone, or video any longer than 10 seconds (up to 60 minutes' worth in this case), both Bluetooth and infrared are available, as well as an optional data cable for PC connectivity.

Bluetooth and infrared are best for use between phones, and the inclusion of both is more than we'd expect. It means that, as long as the phone you want to send to is fairly recent, chances are that it will have one or the other ways of receiving.

Another media feature especially well catered for on the 6111 is audio. The three applications found in the Media folder in the menu offer the camera, the media player and the music player. The music player can handle both MP3 and AAC music files, and can use either type for ring tones, as well as polyphonic and downloaded types.

The external speaker can be extremely loud, offering the possibility of using the phone as a music player in its own right, but stereo sound is best, using the included handsfree set with stylish ear pieces and a remote control. The handsfree unit also works as an antenna for the FM radio, and the remote carries controls for receiving calls, adjusting the volume and pausing tracks.

For all media and applications, 23MB of internal memory is provided. This is reasonably generous, but there isn't a memory card slot for boosting this.

More sober applications include an email client, and an XHTML internet browser, giving access to enhanced mobile internet surfing. Importantly, the 6111 is tri-band, meaning that it will work almost anywhere in the western hemisphere.

Voice functions include voice dialling for up to 25 presets, and commands for a further 16 functions. The 6111 can also make voice recordings of up to 60 minutes.

The more advanced technical capabilities of the 6111 show up again in the included games. There are four as standard, with the option to download more - though it should be a while before you're hankering after extra entertainment.

Backgammon and Solitaire are decent renditions of the staple classics, and both Golf Tour and Rally 3D are the type of game we'd expect to be popular on download sites, offering a much more immersive experience.

Despite the size, the 6111's battery performance wasn't any cause for concern. The quoted standby figures seemed fairly accurate, and even heavy users should be able to get by for more than a day on full charge.

We made 10 minutes' worth of calls and played a few music tracks - and needed to recharge after more than two days. With heavy use of the music player, a charge will be needed every day, but this is no worse than the current state of play with all music capable mobiles.

Voice quality is good both received and made. Stereo sound is superb, and the attractive earpieces we're sure will prove a major selling point for this very presentable phone.

The Nokia 6111 therefore represents a very smart choice - even if its looks belie its capabilities - and should satisfy a wide audience, from the world of business to the high street. Hugo Frazer