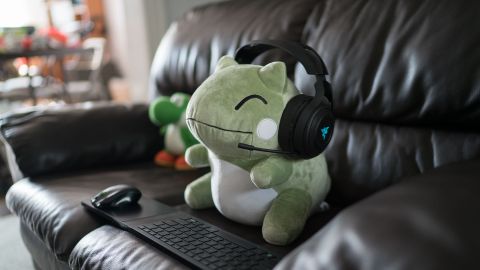 Razer's ManO'War isn't the world's most comfortable gaming headset, but it's an extremely simple and portable setup you can take anywhere for a surround sound experience.

With 7.1 surround sound and respectable bass, the Razer ManO’War is one of the best PC gaming headsets on the market right now. With virtual reality raising the bar for acceptable gaming audio, this $169 (£169, AU$329) headset is exactly what you’ll want to enhance your experience – especially if you can find a great deal on the Razer ManO'War.

What's more, thanks to requiring only a single USB 3.0 port to work, this is one of the simplest 7.1 headsets you can hook up to your gaming PC or PS4.

The Razer ManO’War is, well, it’s a large headset. From the round ear cups to the thick headband, everything about Razer’s latest headset does it big.

It might not look that comfortable at first glance, but when you pick the Razer ManO’War up, the frame feels rigid and there isn’t any cushiony air gap built into the headband. Instead, there’s just a tin leather-ish band embossed with the Razer logo on one side and the smallest layer of padding on the other.

Razer didn’t opt for sculpted ear cups, like you may see on the Corsair Void or the Logitech 993 Artemis Spectrum. Instead, the Razer ManO’War features large, circular cups meant to fit all types of ear sizes. On the one hand, universal fits are great, but we wish they were a bit smaller than Princess Leia’s hair buns.

However, the ear cups feature RGB lighting – so you can make that Razer logo light up in whatever color you want through the Synapse application.

In between the massive set of cans is an equally large headband made of a flexible, but hard, plastic that thankfully doesn't creak. While the thick headband is substantial, the ear cups actually retract and extend along two pieces of metal. They're thin but seem sturdy enough to last through years of usage.

The center piece in the headband actually presses into the top of your head as you pull the sides of the headband, as you put the gaming headset on.

Despite sounding like the world's least comfortable gaming headset, it actually works surprisingly well. The ManO'War fits snuggly on your noggin, but not to the point wherein it feels pinching. It's also lightweight and well vented, letting me game on for hours at a time.

Unfortunately, the ManO'War only work well so long as you're wearing them exactly as Razer intended. Pull one ear cup to the side, and you'll feel it pressing into the side of your head.

Even putting them around my neck doesn't really work well, as the headband is so thick that it ends up rubbing against the back of my head. Razer also designed the ear cups to rotate at a 45-degree angle, which means they end up bumping between both my throat and collarbones.

Razer made some smart decisions to ensure this headset was extremely portable and self-contained.

You'll find all of the controls on the gaming headset itself including a power button and two knobs to adjust the volume level for whichever your game you're playing as well as voice chat. There's also a decent sounding microphone, which is built into the frame and extends out to a long flexible rod when you want to use it.

The most convenient aspect of the ManO'War is you only need to plug in a single 2.4GHz dongle into a USB 3.0 port. Setup is much easier and simpler than plugging in multiple audio cables or a big mix amp. And, just like every other feature on this headset, the dongle stows away neatly inside the its frame – there's even a magnet to help pull it inside.

Altogether, this makes it incredibly easy to pack up the ManO'War and bring it wherever you need serious surround sound. Just tuck in the microphone and slip the dongle back inside, and you're ready to go off to your next gaming tourney. Now, if only Razer could include a carrying case for it.

In the world of surround sound headsets, you either get a set of cans with multiple drivers built into them or audio devices that simulate the effect virtually. The ManO’War falls into the latter camp, using an extra-large 50mm driver to basically cover your ear and project directional soundwaves.

Even though the Razer ManO’War only produces virtual surround sound, it's actually just as good as the Razer Tiamat 7.1 – which actually has multiple drivers – we’ve owned this headset for the last few years. While running around the ruined streets of New York in the Division, we could hear a car alarm go off in the far north west and gun fire from the south.

Aside from gaming, the ManO'War is also pretty decent for listening to music. Of course, it's also perfect for watching movies without needing to buy a sound bar or a surround sound system for your home theater.

And more importantly, it offered a completely lag free audio experience. Razer promises up to 14 hours of battery life. we can personally back up these claims as we got through two six-hour gaming sessions on the weekend before we needed to plug in the micro USB cable.

Although it's not the world's most comfortable gaming headset, there's a lot to like about the Razer ManO'War. Its simplistic setup and bumping audio quality easily makes up for its flaws.