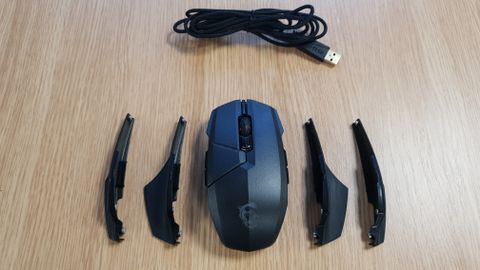 Breaking into the mouse market is a challenge, and although MSI has made some impressive first steps, the Clutch ironically, doesn’t quite have what it takes.

Ahh, the once humble gaming mouse, like the MSI Clutch GM60, how far you’ve come in such a short time. It’s odd to think that only 18 years ago we were first witness to the humble optical mouse sensor. Indeed, Microsoft’s first IntelliMouse is, by far, legendary in the peripheral circles. Ergonomically, it was incredible, the price was perfectly on point, and the performance of that optical sensor, from day one, was second to none.

Since then, however, we’ve seen advancements in sensor tech, the conversion to mechanical switches, refinement of ergonomic design, for people of all shape and sized hands, the advent of wireless technology from Bluetooth dongles, to charging pads, and of course (for good or ill), the inevitable onslaught of the RGB phenomenon (because nothing says you’re a gamer like illuminating your blood cells with that digital multi-colored spectrum).

With established brands such as Steelseries, Corsair, Razer and more, currently cluttering the mainstream with their sophisticated pinky pointers, how does a budding company such as MSI claw its way into snatching some of that market share away from the big boys?

But let’s talk the big bucks first, how much is the Clutch GM60 going to set you back? Well the sun never sets on the MSI empire that’s for sure. From Oz, to the US to the UK and Europe, if you’ve got access to an Amazon account you’re only a few clicks away from owning one of these mighty mice. For $80, £70 or AU$110 the Clutch GM60 could be yours.

So, is it overpriced? Absolutely. Unfortunately MSI’s really missed the mark on this one when it comes to that point; it’s just far too expensive for what it’s offering. The use of materials, although nice to look at, don’t hold any weight to them.

There’s no confidence imparted when you hold it. Pick it up and shake it and you can hear a slight rattle as the left mouse button (the only one that isn’t replaceable) shakes on its switch. The plastic covers, although swappable, feel brittle, and there’s a subtle, almost satin, powder-coat-like speckled finish to it, but the overall feeling is smooth and absolutely not grease resistant.

Then there’s the replaceable panels. Although ultimately a good idea, in practice they leave a lot to be desired. The two swappable sides (and four side panels included, two of each type for each side of the mouse), don’t provide any ergonomic differences in contrast to one another, merely extending the wings of the mouse.

The one panel that does make a difference is the top one, with one having an ever so slightly lower back hump than the other.

And then we get onto the RGB. There’s three zones total, with the usual 16.8 million colors we’ve come to expect, but unfortunately with each of the zones the light is refracted through what looks like softly frosted plastics, giving it a duller look than much of the RGB we’ve seen. It’s just not a good look for the Clutch.

So then, positives? There’s some, right? Well, the mouse itself is designed around a suitably solid aluminium frame, there’s little to no flex in it, and it does add some much needed weight.

Then there’s a removable braided cable too (although no smooth alternative), and on top of that, you’ve of course got that Pixart PMW 3330 optical sensor, which is a fairly middle of the pack piece of equipment, launched in 2016. It’s notably found in Asus’s ROG Strix Pugio and Evolve mice, and the now deceased Mad Catz RAT 4, and performs fairly well with strong DPI options, and some decent accuracy. It's not phenomenally precise, but good enough. Couple that with the OMRON switches, and it's certainly a durable bit of kit.

The Clutch GM60’s biggest problem, isn’t the overall design, however. Nor is it the materials or even the price. The problem is its identity. Scroll through the product page, and you’ll see MSI’s marketing gurus plaster images of esports champions, lightning dashing across the screen, and a cornucopia of RGB colors, and that is where the problem lies.

As with many peripherals these days, MSI seems to be trying to sell this bad boy solely on the back of the esports scene, yet its failed to take into consideration just what exactly a mouse aiming for that kind of market should be.

On the whole it’s a mouse that’s stuck between two worlds. On the one hand, it’s kinda light (170g), sort of customisable with swappable panels, removable cables, features a sensor that comes from a brand we all know and love, and packs those ridiculously durable Omron switches.

On the other hand, the cable is braided which increases friction, while its ambidextrous, ergonomic design doesn't quite gel in comparison to mice that are far lower in the price point pack than this is. Ultimately, there's a feeling that MSI has spent way too much time on features that aren’t exactly necessary for developing a good mouse.

The Clutch GM60 is an interesting offering from MSI, however, like Asus, it’s clear the company still has a long way to go before it can break into the big leagues and take on the likes of Steelseries, and co as far as peripheral’s are concerned.

There’s just too many imperfections, too many design decisions that were overlooked or ignored because they were “good enough”.

Let’s give you a good example. Steelseries sent us an engineering sample of the first Rival 700, for early review way back in May of 2016. We wrote up the review, had it ready to go live, and last minute, after early feedback from a few journalists and gamers, they pushed back the launch by an incredible 12 months until 2017. What was so wrong with the mouse to cause that delay? They weren’t happy with one of the included cables. They spent the next year redesigning and manufacturing the cable.

A costly decision for Steelseries? Likely, and arguably for a burgeoning sub-sector of MSI’s industry, not something they could do on the fly like that either. Yet it’s ultimately those kind of decisions that make this market what it is. It’s why it’s so hard to get it right, and why your mouse has to be designed with absolute purpose, not sat somewhere in between those two worlds, a jack of all trades, master of none.