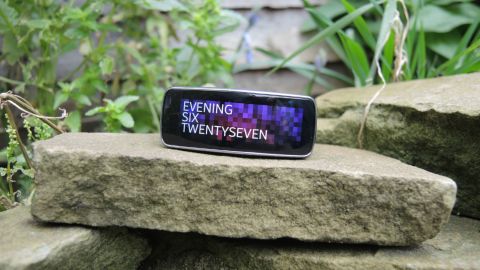 A curved face and a rather nice UI

Combining fitness band and smartwatch, the Gear Fit is beautifully designed. It just lacks a bit of substance right now.

Even though Samsung is rolling out its new pair of Gear smartwatches for 2014 (the Gear 2 and Gear 2 Neo) it clearly sees a lot of potential in the more humble fitness band.

So with that in mind it's also pushing out a third Gear sibling in the form of the Gear Fit, a wearable band that aims to be big on style but a little less function-heavy than its brothers - no camera, no remote control, no storage for music - leaving it as a halfway house between fitness device and smartwatch that comes in at $199/£180 (around AU$212).

The question of how to combine these two categories is one of the most interesting in wearable tech right now. No one really knows what wearables will or should look like in five years time, but it feels like Samsung is achingly close to the truth with the Gear Fit.

That's not to say this device isn't without its faults, but with a few extra adjustments Samsung could have a winning wearable on its hands. The potential is clearly in there.

First things first - you'll need a compatible Samsung device in order to use the Gear Fit, of which there are currently 18 including the new Galaxy S5. It's frustrating but Samsung's probably not going to open it up any time soon, so we'll just have to suck it up.

The good news is that if you do have a Samsung device, the Gear Fit is a beautiful companion. Samsung has bestowed a curved 1.85-inch AMOLED screen on the Fit that can't actually be flexed but looks gorgeous nonetheless.

In fact, I probably spent most of my first hour with the Gear Fit changing wallpapers and messing around with the home screen layout, just appreciating how nice it all looked.

As someone who usually has some sort of gizmo on my wrist these days, the other thing I immediately noticed was how incredibly comfortable the Gear Fit feels on the arm. I have pretty small wrists and the Gear Fit is a tad more chunky than the likes of the Garmin Vivofit and the Nike Fuelband.

But even with both those factors considered, I find the band surprisingly more comfortable than a lot of its competitors, if a tad bigger than I'd ideally have it. It's actually less than half the weight of the Gear 2 - so light that after an hour of wearing it I forgot it was even there.

Plus, it's water resistant (up to one metre for 30 minutes) and dust resistant so you won't have to worry too much about ruining that oh-so-nice screen.

The adjustable hypoallergenic wristband is nuanced enough to ensure you'll always get a comfortable fit with the two-prong buckle, and this greater flexibility means Samsung can have a 'one size fits all approach' where more rigid fitness bands (like the Fuelband) come in different sizes for different wrist girths. You can, however, remove the band altogether if you want to swap it for another colour.

Initially, the Fit was locked at a horizontal display but Samsung has since issued an update that gives you the option of a vertical rotation instead. Having tried both, the vertical mode has an undeniably more ergonomic feel to it.

I'll get into the Fit's 'smart' features later, but it's worth pointing out that the screen proportions (horizontal or vertical) means space is limited when it comes to things like notifications.

Reading SMS and emails is a neat addition but most people will find scrolling on the tiny screen in horizontal mode a bit fiddly considering that the screen height is little more than the diameter of the average finger.

But for the odd "Gary has retweeted your picture of a dog in a sombrero" it's perfectly suited.

Move to the top of the device and you've got a single button to turn the screen on or off. One little feature I'm particularly fond of is Double Press which lets you assign a function of your choice that can be instantly opened from sleep by tapping the button twice.

Useful for seeing your notifications in a flash or getting a quick update of the amount of steps you've taken so far that day.

Knowing all too well that the screen gives off a lot of glare, Samsung lets you dial up the brightness from 1 to 6 - 6 being "Outdoor mode" - so you're guaranteed to always have a clear reading and a nice vibrant screen in the daylight. After 5 minutes at maximum brightness the Fit will turn the dial down to 4, which helps keep the battery going for longer.

On the downside, the screen isn't always on - as obviously that would obliterate the battery - but the Fit can be woken up to check the time with a turn of the wrist.

It's a nice addition but you'll probably find yourself more frequently using the button. I often found that I had to turn my wrist slightly in the opposite direction before turning it all the way back around in order to get enough 'twist' to wake the display up. More effort than it was worth.

While I was pleased (though not majorly impressed) to get a good three days of use out of the battery, charging the Fit requires a small accessory that clips onto the back and creates a bridge between the band and the Micro USB charger.

It's something you could easily lose, and if you do you'll have to pay for a replacement before you can juice up again. It's also an extra thing to carry around.

Next Page Interface and fitness