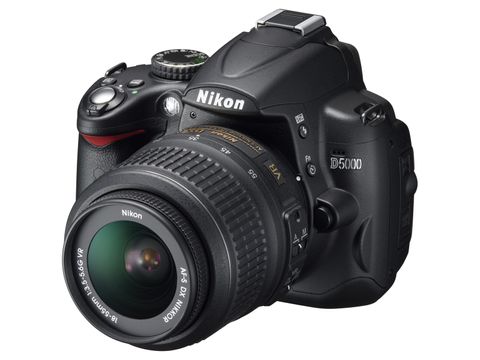 The addition of extra features, like the innovative Scene Recognition System and articulated LCD screen are enough to make the Nikon D5000 a very desirable camera

The Nikon D5000 is intended to bridge the gap between the popular but feature-thin entry level D60 and (now discontinued) D40, and the mid-range D90.

Like the latter, it offers a HD video recording mode, and in fact shares the same 12 million-pixel sensor, and AF, white balance and metering systems.

The influence of the D60 and D40 is mainly ergonomic, in that like these earlier models, the key features of the D5000 are accessed via an innovative and user-friendly graphic user interface (GUI).

Crucially, this GUI is designed to explain, as well as display the main shooting settings.

For example, experienced photographers may not think twice about what aperture and shutter speed settings mean, but the terminology can quickly confuse beginners.

To this end, an aperture blades graphic on the rear screen of the D5000 opens and closes as the aperture value is changed, and shutter speeds are displayed in full, as fractions of a second.

The GUI can be extensively customised, and usefully, the display rotates automatically depending on how the camera is held. Oddly though, the D5000 does not feature the same eye-sensor of the D60, so the LCD status screen (which is on by default) does not switch off when the camera is held up to the eye.

It's a minor point, but annoying when taking photographs in subdued light, where the status display is distracting and even a little dazzling when looking through the viewfinder.

Of course, with the D5000, the viewfinder is not the only option, and the new camera features virtually the same highly capable Live View system as the D90, but with the overdue addition of a fully articulated LCD screen.

This screen (which unusually, hinges along its lowest edge), makes Live View a pleasure to use, much more so than in the D90 and D300, and allows a greater degree of freedom when shooting from awkward high and low angles.

New to the D5000 is a 'subject tracking' mode in Live View, in which it is possible to designate a particular subject as the 'target' for the camera to follow around the scene.

Although not an 'AF tracking' mode as such (the AF system is not actually active until the shutter button is half-pressed) this function is very useful both for capturing moving subjects, and for off-centre compositions.

Apart from the addition of subject tracking, the D5000's AF system is identical to that used in the D90, and as such, it proved equally responsive, and equally accurate in all of the situations in which we used it.

It should be noted, however, that whereas the D90 features an inbuilt AF motor, to allow AF with older Nikon lenses, the D5000 can only achieve automatic focus with AF-S and AF-I lenses.

Video recording is activated easily in Live View mode by pressing the 'ok' button, and 720p video clips can be captured at a maximum length of 5 minutes per clip.

No AF in video mode

Focussing is manual only in video mode, and like the D90, the D5000's inbuilt microphone is highly sensitive. Unfortunately, it can be a little too sensitive, and tends to pick up the sound of the lens being zoomed or focussed during video capture. Unfortunately there is not an option to attach an external microphone.

The D5000's sensor is the same as that used in the D90 and D300, and it appears not to have been significantly tweaked for the new model. Image quality is very high, and the wide ISO range of 100-6400 (equivalent) is adequate for virtually any situation.