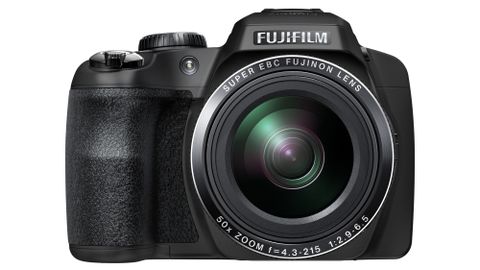 The Fujifilm FinePix SL1000 grabbed headlines earlier this year when it was unveiled at the top of the company's new range of bridge cameras, joining the Sony HX300 and Canon PowerShot SX50 in boasting the largest focal range on the planet.

Indeed, the Fuji SL1000's 50x zoom is quite spectacular, and is a clear competitor to its Sony and Canon rivals. But while on one hand this camera will make fans of superzooms drool with anticipation, it should also appeal to more advanced photographers looking for something lighter than their DSLR - or possibly even to back it up.

Looking beyond the Fuji SL1000's benchmark-setting (or, rather, benchmark-joining) headline spec you'll notice an impressive array of supporting features, such as its Fujinon lens's maximum aperture of f/2.9, rising to f/6.5 at the telephoto end of its 24-1200mm equivalent focal length. Not too shabby.

Add to that a 16 million pixel 1/2.3-inch BSI-CMOS sensor, which boasts the capability of shooting up to sensitivities as high as ISO 12,800, a 920k dot electronic viewfinder, along with a 920k dot, 3-inch tilting LCD screen (directly up or 45-degrees down) and, crucially, the ability to shoot in raw format.

Suddenly the Fuji FinePix SL1000 begins sounding less like a typical bridge camera and more like a serious contender to back up your DSLR (albeit with a physically smaller sensor) or even be your primary camera for travel and street photography.

And the eye-popping specs don't stop there. If the 50x zoom isn't enough for you, Fuji's Intelligent Digital Zoom feature enables you to effectively double the Fuji SL1000's zoom range to 2400mm, or 100x.

The camera also includes a 1cm Super Macro mode for shooting close-up subjects, along with a hotshoe (and a built-in flash), customisable Function button, a mode dial for switching between manual, automatic and semi-automatic modes and a second zoom lever on the side of the lens barrel, enabling you to adjust the zoom with your left hand.

On the back of the camera, an eye sensor detects when you've lifted the camera to your eye, enabling photographers to quickly switch between composing via the LCD screen and the EVF.

Budding videographers will find Full HD video recording at 60p, along with stereo sound and a host of video editing features, such as Movie Trimming.

So the Fuji FinePix SL1000 seems to offer something for everyone - on paper, at least. And all of these specs aimed at advanced users are available for a fairly reasonable price.

But with so much on its spec sheet, is the Fuji SL1000 in danger of being a jack of all trades, master of none?

The Fuji FinePix SL1000 fits snugly into your hand, thanks to its contoured design and ribbed rubber grip. An indentation at the top of the extended grip houses your middle finger, while your index finger rests naturally on top of the shutter button. The Fuji SL1000 felt so secure in our hands, thanks to this grip, that we never bothered to attach the camera strap.

Fuji has also given the SL1000 a robust feel. Its doors, buttons and switches are all firm and feel secure in their place - yet not so much so that you need to force them into position.

While we, of course, didn't try this, the Fuji SL1000 feels like one of those sturdily built cameras you can drop once and not have to worry about.

That said, the Fuji SL1000 isn't light. If a carry-anywhere superzoom is what you're after, then there are more portable options out there for you. However, you'll have to sacrifice on focal range - and that, really, is what gives the Fuji SL1000 its heft.

Situated at 10 o'clock on the wheel is a delete button for when you're in playback mode. In the centre of the wheel is a standard Menu button. All of the Fuji SL1000's buttons are sensibly placed and, crucially, none sits under any part of your hand when holding the camera, eliminating any potential for accidentally changing the settings.

Fuji claims the FinePix SL1000 starts up in 0.9 seconds, but we found that while the camera makes noises in that time, it's closer to two seconds before it's fully operational and ready to take a picture.

What's more, the on/off slider, which you drag to the left, and then springs back to the right, is a little temperamental.

Not every time, but about a quarter of the time, we had to drag the slider twice, sometimes three times, to get the camera to turn off or on. Possibly we simply hadn't slid it far enough, but if you're shooting street photography and repeatedly starting and stopping, is this something you really want to be preoccupied with? The slider seems an odd choice.

But this is a small issue. Once you're up and running, the Fuji SL1000 is quite simple to use. The menus are straightforward, and quick and easy to navigate.

When you're shooting in manual exposure mode or one of the priority modes, you can easily switch between aperture and shutter speed settings by pressing the x/- exposure compensation button on the camera's top plate. Scrolling clockwise and anti-clockwise on the four-way control wheel adjusts these settings.

Composing via the LCD screen is simple and easy, even in bright sunlight. Dual zoom toggles on the camera's top plate and on the lens barrel allow for enable you to make adjustments to your composition in any orientation of the camera.

The electronic viewfinder is also bright and clear, and a joy to use. We particularly like that you can use the camera's menu system while looking through the viewfinder, but again this is a feature of bridge cameras as a whole.

It's the eye sensor, however, that caused us hassle. The sensor, situated directly to the right of the viewfinder screen, detects when your eye is on the viewfinder (or moving away from it) and thus switches automatically between the LCD and EVF. However, in our test it proved extremely sensitive.

The camera, for instance, switches from LCD to the viewfinder when brought to a space of 4 inches from your eye. This may sound close, but it's not unheard of to compose on your LCD screen from that close a distance.

What's more, quite frustratingly, the camera switches from LCD to EVF when you extend the tiltable screen - presumably because the extended screen sets off the eye sensor - effectively rendering this feature pointless.

The only way around this that we found was to press the EVF/LCD button when we wanted to compose via the LCD screen or viewfinder.