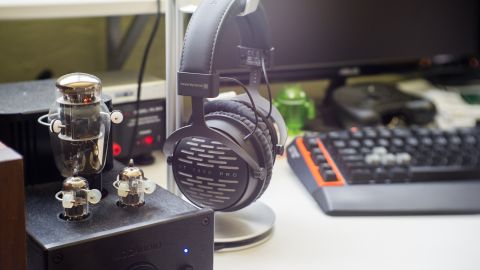 The Beyerdynamic DT 1990 Pro feature stunning resolution, soundstage and build quality. Its sparkling highs, tight bass and detail retrieval make it great value for money for those looking for audiophile headphones that sound great with all types of music.

While Beyerdynamic may not be as well known as its German brother, Sennheiser, the audio company has a history of creating some of the best sounding audio gear on the market – the company’s DT770, DT880 and DT990 were renown for their excellent build and sound quality. Trust us, there’s a very good reason why many audio engineers choose Beyerdynamic for monitoring and mastering sound.

The headset we’re looking at today, the DT 1990 Pro, are an open-back version of the Beyerdynamic DT 1770 Pro, which won our Editor’s Choice for its imaging, design and value for the money. Both headphones are priced the same ($599, £589, AU$1,159), so you won’t find a deal picking up one over the other. The difference here comes down to sound

So does the open-back Beyerdynamic DT 1990 Pro sound as good or better than the already excellent DT 1770 Pro? Let’s find out.

The Beyerdynamic DT 1990 Pro feel extremely solid in the hand, like a professional audio tool should. The headphone features a lot of metal, from its beefy earcup forks to its open-back driver grills.

The black-on-black color scheme is understated and screams serious audio gear. This is the headphone Darth Vader would rock out with. The driver grills have a silver colored mesh, breaking up the all-black look and making the DT 1990 Pro handsome, but not necessarily a “pretty” or ultra-stylish headphone.

The pro-audio design continues with the headband and ear pads. The headband is made of plush leather and distributes the headphone’s 370 gram weight evenly across the top of your head. While the DT 1990 Pro are by no means light, the headband and earpad design make them comfortable to wear for extended periods. They’re not as comfortable as the Sennheiser HD 600, which are quite a bit lighter at 260 grams, but that’s because the Sennheisers are also made entirely out of plastic.

The earpads are made from memory foam and wrapped in gray velour, which are very comfortable for long listening sessions. Though, it is possible that your ears will get a little warm, as the pads don’t breathe very well. It’s a minor niggle but something to be aware about.

That said, it’d have been great if Beyerdynamic would have included mini-XLR connectors on each earcup to easily switch to a balanced cable set up, but it’s understandable  why the company went with a singled-ended set up: Having a single replaceable cable is less of a hassle for professional audio engineers.

Evaluating the sound quality of the Beyerdynamic DT 1990 Pro is a bit of a challenge as it's actually two different sounding headphones. Included in the case are two sets of earpads: an “A” version which features a neutral frequency response and a “B” version with a slight bass boost. Switching pads for the first time is an exercise in frustration, but you’ll quickly learn the best technique to rotate the pads to get them to seat properly.

The DT 1990 Pro came pre-installed with the B pads out of the box, which makes the headphones sound really fun. Bass is a highlight of the headphone, providing great slam, speed and depth. The pace, rhythm and timing of the DT 1990 Pro are truly addicting and, if you’re like us, it’ll be tough to resist the urge to tap your toes along with the music while they’re on your head.

However, it’s quite obvious that there is slightly elevated bass with the B pads, which you won’t want to use for serious, analytical listening. Switching to the A pads, bass energy was tamed but there was still excellent resolution, depth and speed. The A pads balanced out the sound signature of the DT 1990 Pro, making them excellent studio monitors.

Highs were equally excellent between the two pads, providing a ton of resolution in the upper frequencies. It’s not often a headphone reveals details about a song that we haven’t heard before but that’s exactly what the DT 1990 Pro did for us. The resolution is so good that you might actually turn around while listening to the beginning of Radiohead’s Daydreaming because you’ll think the pair of indistinct voices speaking are coming from behind you. (We know because it happened to us.)

While treble resolution is excellent, the highs are a bit too energetic at times, reaching the threshold of my preference for brightness. That said, while listeners who are sensitive to energetic highs may not like the highs of the DT 1990 Pro, we quite enjoy the sparkling highs and thought it added a touch of uniqueness to the headset’s sound signature.

Mids are the only area where we thought the DT 1990 Pro could use some work. With the bass-heavy B pads mids sound more recessed than we usually like, and while switching to the A pads brings the mids forward a bit the DT 1990 Pro still won’t have the lush mids of the Sennheiser HD 600 or Grado RS2 .

As they’re open-back, the DT 1990 Pro are meant to be used at home or in the studio for serious analytical listening. Sound is able to get in and out but the good news is that the open-back design gives you the DT 1990 Pro a great sense of space. Soundstage is quite wide, though not as wide as the AKG Q701. Soundstage depth is also good, allowing even the most lackadaisical listener to pinpoint the exact location of where each instrument is playing.

While we’re talking about the performance of the DT 1990 Pro, we should talk about its 250 ohm impedance and amp pairings. It should be noted that these headphones will require a good amp to get the most out of them. We tried the DT 1990 Pro with the WooAudio 3 tube amp and Schiit Audio Magni and both amps sounded great though, if we had to pick, we preferred the warmth of the WooAudio, which helped tame the brightness.

Just for giggles, however, we connected the DT 1990 Pro directly to a OnePlus 3. The phone did a decent job powering the headphones, but the headphones lose their magic without proper amping. Moreover, the headphones sound good playing directly from the OnePlus 3 but resolution and energy is lost.

It’s not often we listen to a headphone that impresses us so much that we stay up until 2 am rediscovering my favorite albums. We listened to record after record with the Beyerdynamic DT 1990 Pro to see what unheard details the headphones would reveal.

We love that two sets of earpads are included to tailor the sound, giving the headphones a dual personality. Want to master something? Use the A pads. Want to let your hair down and have some fun? Swap in the B pads.

The Beyerdynamic DT 1990 Pro do so much right that we’ve already added them to our Christmas wishlists. The resolution they provide is simply amazing and their bass slam is addicting. Its open-back design may not be great for wearing around town, but it provides an expansive sense of space and imaging while you're at home listening to music on the couch.

One of the only downsides of the Beyerdynamic DT 1990 Pro is that its highs and bass overwhelm its mids at times. The included set of “analytical” pads definitely help bring the mids forward a bit, but they still put singers’ voices further back than we’d like. The DT 1990 Pro would not be our first pick for jazz or vocal music, though they still sound very good.

Highs can also be sound strident, especially if you’re sensitive to energetic treble. That said, while we found the DT 1990 Pro to be a tad bit too bright at times they did not suffer from sibilance.

In all honestly, though, those are minor complaints overall. The Beyerdynamic DT 1990 Pro are brilliant headphones that deserve room in any music lover’s headphone collection.

If you haven't noticed, we think the Beyerdynamic DT 1990 Pro are an exceptional pair of headphones. Said simply, they’re professional-grade cans that anyone will enjoy listening to. They're not the most neutral-sounding headphone but their resolution and playfulness make them extremely enjoyable to listen to for hours.

Moreover, they strike a great balance between being built like a tank while still being comfortable. We also love that Beyerdynamic includes two sets of different sounding ear pads so listeners can tailor the sound for different tasks. In terms of actual performance, the DT 1990 Pro showed us details from our favorite songs that we never heard before and that makes them worth every penny of its $599 (£589, AU$1,159) asking price.