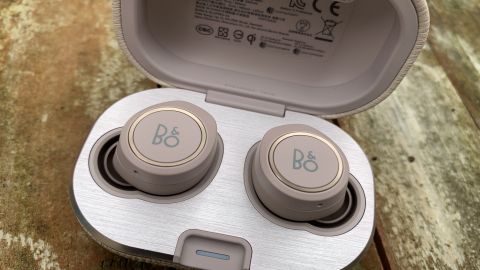 The Bang & Olufsen Beoplay E8 2.0 truly wireless earphones are a beautiful pair of earphones. Improving upon its predecessor, they look as great as they sound. With responsive touch controls and easy setup, they almost feel worth the premium price tag.

Offering great design as well as great audio performance, we were fans of the B&O Beoplay E8 before they were revised. Now, they're a bit more expensive than before but they're also far more appealing too with the addition of wireless charging and a few other extra bells and whistles.

We tried the Bang & Olufsen E8 2.0 truly wireless earphones out to see if they really are worth the extra pennies over the earlier version.

The Bang & Olufsen E8 2.0 truly wireless earphones retail at a recommended price of £300/$350 but that price is variable. Notably, if you're willing to go for a slightly less popular color such as white, you can find them on retailers like Amazon for about £230 ($around $290). It's all down to just how important the color scheme is to you.

If you want to buy the official B&O wireless charging pad (more on that later), expect to pay an additional £110 ($140) for the pleasure. Bear in mind that all decent Qi compatible wireless chargers will do the same job for less.

We'll cut to the chase - the Bang & Olufsen E8 2.0 truly wireless earphones look gorgeous. The case is a pebble-shaped, leather enrobed design that wouldn't look out of place in a jeweller's window. Lift the lid and a metal lining wraps around the middle of the case to protect your valuable assets. On the back is a USB-C based charging port for wired charging purposes.

The case is suitably snug too. Accidentally toss the carry case somewhere or drop it, and the earbuds stay safely stored away. Unlike other charging cases, you won't have to worry about any earbuds going flying across the floor here. It oozes the kind of level of class you'd expect from earphones that retail at £300, being as much a fashion piece as they are great audio devices.

There's also the all-important addition of Qi wireless charging support. Thanks to this, the Bang & Olufsen E8 2.0 true wireless earphones are truly wireless in more than just the listening way. Simply place the charging case on a Qi charging pad and you won't have to worry about using its supplied micro USB cable to charge. Bang & Olufsen sell an official charging plate, but you can easily use any Qi based one and it'll work.

The earphones themselves look good and skip any awkwardness that can arise from buttons sticking out. They simply have a touch-sensitive pad on each bud which gives you all the control you need while retaining their stylish looks. Indeed, setup was a breeze. You know how all Bluetooth pairing should only take a matter of a second or two but that's not always guaranteed? These earphones actually did take hardly any time to pair with a smartphone.

Once paired, the right bud dictates volume, play/pause and skip track functionality. The left bud allows you to activate the ambient noise mode which pauses the music and helps you to hear outside sounds without having to remove the bud - perfect for when trying to cross a road while wearing them, for instance.

Like with any touch-sensitive control, they do take a bit of getting used to. We found it occasionally a little too easy to stop a track rather than change the volume or skip a track. That's because simply touching the pad causes it to pause, while you have to perform a sweeping motion with your finger to increase the volume, on top of also trying to avoid holding one's finger to the pad and pausing it. Practice really does make perfect here, or at least close enough to perfect.

We mentioned the case looks great but how does it perform as a charging device? Actually, pretty well. The earbuds hold about four hours of playback on one charge with the case holding an additional three charges, so you get about 16 hours of playback time before needing a power source. While a full recharge takes a couple of hours, you can easily charge it for about 10-15 minutes and still get an hour or so of playback in exchange. Ideal for those times when you're not as organised as you should be.

Wireless charging is similarly convenient as you can just toss it onto the charging plate when need be, rather than dig out a micro-USB cable.

Like with any wireless earphones, the Bang & Olufsen E8 2.0 truly wireless earphones come with a set of tips for the buds, so you can get just the right fit for your ears. It's worthwhile experimenting to find a comfortable fit because we did run into some issues. Notably, despite thinking we'd found the right size, the tip we went for still led to the right earbud falling out of our ear when jogging. Luckily, they're pretty sturdy and able to take a fall onto concrete. Still, it's a little unsettling while trying to increase one's pace, even when we didn't find it happening again on our run. Of course, mileage will vary here as everyone's ears are different.

Audio quality is undeniably excellent. It was the case with the Bang & Olufsen E8 2.0's predecessor and it continues to be the case here. Tonal balance is suitably neutral with everything sounding just how we like. The bass is just right with loud tracks sounding punchy, with more delicate music still sounding a delight. If used to cheaper earphones, you'll find yourself feeling like you’re rediscovering beloved music from before, thanks to its rich tones.

There's also the all-important moment when listening where you can occasionally spot something that you just won't be able to hear on other, less inexpensive headphones or earphones.

It's the kind of quality that could ruin you for lesser earphones.

That's even before you delve into the B&O app which gives you more options. You can choose from some pre-set themes such as Commute, Clear, Workout, or Podcast, but you can also use ToneTouch to tweak things to how you want them to sound. This is a simple matter of using your finger to drag between warm, excited, relaxed, and bright. Most users will rarely find this necessary but it's a neat extra, and more welcoming than a true equaliser setup that other apps and earphone makers favour.

The only real issue here is there's no active noise cancellation despite rivals like the Sony WF-1000X offering such features for less. However, the Bang & Olufsen E8 2.0 truly wireless earphones are pretty good at blocking out background noise via its Transparency feature which can be further tweaked in the app. It might not be as effective as a truly active noise cancellation set of earphones can provide, but it's close.

So, the Bang & Olufsen E8 2.0 truly wireless earphones look great and sound great. They're not perfect though. The touch-sensitive buttons are a little too sensitive at times, and there's no truly active noise cancellation. However, for most users, these aren't massive issues.

Clearly aimed at those that want their accessories to look as good as they sound, it's hard to not find these earphones appealing. While a few design related features need some tweaking, they still sound exceptional and look the part too. They're a premium purchase but they certainly feel like you've paid good money for them.