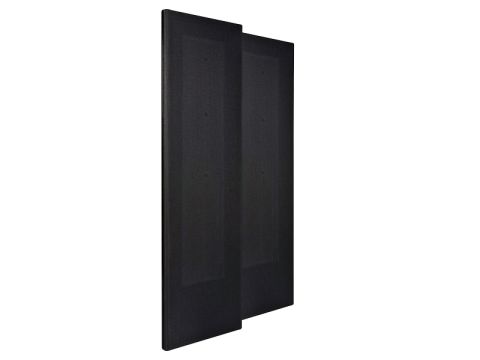 These slim and stylish speakers offer quality sound while being discreet

Although limited in loudness and deep bass, its sound quality has fabulous neutrality, even tonality, low coloration and magnificent freedom from boxiness. It's great with acoustic and classical material

The Minnesota-based US Magnepan Corporation has been making its various Magneplanar speakers for more than 40 years, though the range has rarely found its way to the UK during that time. The good news is that Hifi Sound of Stockton-on-Tees is taking on the agency.

Maggies are uniquely different. The fact that they're full-range dipole panel designs means that their closest relatives, technologically speaking, are Quad's electrostatic designs.

But they have the obvious added advantage of offering some models at a much lower cost than Quads, while still possessing some of the same unique attributes of the type. Such is the case with this £2,500 per pair MG1.6.

Because it's a panel speaker, it's tall and wide with a large frontal area but minimal depth, and it operates as a dipole, radiating equally from the front and the back. The back radiation is out of phase with the front radiation of course, so when the wavelength of the reproduced sound is larger than the width (ie at low frequencies), the two cancel each other out.

Physics therefore dictates that the 48-centimetre width here will, in practice, restrict bass extension to 50Hz.

Both drivers run side-by-side the full height of the unit, the larger bass/mid driver crossing over via very gentle slopes to the narrow mid/treble unit at around 600Hz (a big advantage over conventional speakers that cross over around 3kHz, where the hearing is more sensitive).

Brackets are supplied and support the panels effectively and with good stability, though without particular floor-coupling arrangements.

Each speaker has three pairs of rather awkward terminals, enabling not just single-or bi-wiring but also usefully allowing resistors to be optionally added to reduce relative treble level if desired.

Our first and well run-in pair were damaged in transit, so we had to review a brand new pair. This meant that the overall tonal balance was a bit too bright and it therefore proved helpful to put the supplied 1.2ohm resistors in series with the treble quasi-ribbons.

The MG1.6 does have limitations, especially in deep bass extension and sensitivity, so in practice loudness capability is almost certainly limited. This is, therefore, not the speaker for those who like their music heavy and loud. The Chemical Brothers tended to sound quite scratchy.

But for those of more moderate tastes, this Magneplanar is a revelation for its fabulous neutrality, wonderfully even tonality and lack of coloration, as well as magnificent freedom from boxiness. It sounds wonderful when working at very low levels, and exceptionally fine with acoustic and classical material.

As the speaker comes as mirror-image pairs, there's the option to have the treble ribbons on the inside (better focus) or the outside (wider image). On balance the former was preferred under our conditions.

Imaging is excellent in either case, the shifts noted with head movement attesting to the essential phase accuracy. And although it measures bass-rich, it actually doesn't sound it – agile, crisp and clean are the adjectives that come to mind.