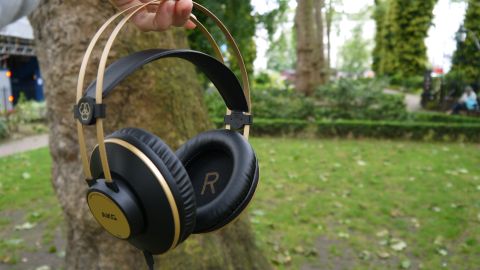 They may not feel like a premium pair of cans, but the sound quality of the K92s more than make up for their plastic exterior. Still a sound investment from AKG several years on.

Update: The AKG K92s are still some of our favorite cheap over-ear headphones, two years on from when it launched in 2016. With amazing sound and comfortable ear pads, the K92 has everything a headphone needs to compete - and win - in 2018 and maybe even beyond. Read on for why in our original AKG K92 review below...

As is the case with most tech, when it comes to headphones most of us tend to (often correctly) assume that you get what you pay for. If you use the cheap earbuds that came with your phone, chances are your music is going to sound flat, a bit tinny and lack general audio excitement.

But upgrade to some of the most high-end cans on the market, like the truly excellent Sennheiser HD800, and you music sounds almost unrecognisable. It's got dynamism, expression, and individual instruments that you can actually tell apart rather than having them all merge together in a big mess of noise.

AKG meanwhile has always been a company willing to turn the idea of 'getting what you pay for' on its head. Just take a look at the K451 headphones, which offer a level of sound quality that far outstrip their budget price tag, while its Y50 manage to offer a very stylish set of cans that feel far more premium than their price implies.

That said, at just $60 (£58.80) the K92's are a very reasonably priced set of headphones that in some ways match the features of cans double their price, but in other ways fall prey to many of the problems you'll run into when you bag yourself a budget set of 'phones.

Their size means you're unlikely to want to wear these headphones while out and about. They're much better suited to being used at home, at a desk, or on a longer journey such as a plane ride.

In these instances their size is an asset rather than a drawback, since it means the headphones sit nicely over, rather than on, your ears.

This does have the downside of making the headphones almost impossible to wear around your neck, but this shouldn't be too much of a problem unless you're using them while on the go.

The flatness of the K92's does introduce the problem of the cloth inside the headphone cup touching your ears. This might not bother you, but it always felt a little bit weird to me, like my ears were touching a bit of the headphones that wasn't meant to be touched.

Outside of the cups themselves, the band that connects them both has a well-made support strap that means the weight of the headphones sits on the top of your head rather than on your ears themselves.

When combined with their size, this headband meant I was able to use the K92's for hours at a time without feeling any discomfort, which bodes well for using them for marathon music or gaming sessions.

At least the AKG branding on each earcup is pretty tasteful.

Cable-wise the AKG's opt to have a single cable connecting to the left earcup which I liked, since two cables often results in more tangling. Unfortunately this cable is non-detachable, although at this price point a detachable cable is much less common.

Then again AKG did feature a detachable cable on its K451, which is even cheaper than the K92s.

AKG giveth and AKG taketh away, I suppose.

Overall I was happy with the construction of the AKG K92s. The all-plastic body and non-detachable cable is completely appropriate given the price point, and ultimately forgivable given that these headphones are comfortable to wear.

If I had to guess, I'd say that the slightly cheaper plastic construction has been chosen by AKG in order to allow it to maximise the performance of the internals of the headphones, and it's hard not to agree with its decision.

The AKG K92's 40mm drivers offer a great frequency response of 16Hz-22kHz. For reference the standard for most headphones is 20Hz-20kHz, since this is generally accepted as the audible frequency range of the human ear.

An expanded frequency range does not automatically mean a pair of headphones will sound better, but the extra headroom is helpful all the same.

Listening to a Scar Tissue by the Red Hot Chili Peppers through Tidal's lossless streaming quality reveals the K92's to have a nicely balanced sound. Chad Smith's bass drum manages to have kick without overwhelming the rest of the track, and separation between the rest of the instruments is good, but not excellent.

The soundstage on these headphone is slightly squashed compared to more expensive models. When I listened to a recording of Mozart's Violin Concerto in D major it wasn't especially easy to get a sense of the physical space the recording took place in.

These aren't meant as outright criticisms. The AKG K92's perform excellently for a pair of 'phones at their price point, but we've been spoiled by AKG in the past with models that have managed to sound as good as headphones double their price.

The final track I tried was the sonically complex Shackler's Revenge by Guns N' Roses. There's a lot going on in the track, several layers of guitars, vocal and synths, and the K92's dealt with them all well without letting the track feel muddled.

The track managed to feel nicely separated and balanced, and was very enjoyable to listen to.

The AKG K92's are a good sounding pair of headphones that are exceptionally comfortable to wear for long listening periods. For this price the sound they offer is clear and crisp, and they're ultimately a very enjoyable pair of headphones to listen to.

Their plastic construction can't really be faulted at this price, but the K92's do feel like a budget pair of cans. The fact that the cloth inside of the earcups rested on my ears was a minor annoyance, but hardly a deal breaker.

At well under $100 / £100 the AKG K92's perform admirably for their price price point. They might not feel like a premium pair of headphones in the hand, but they make a good effort at sounding like it. Spending a little more may deliver incremental improvements in build and sound quality, but at this price point the K92's are a solid purchase.