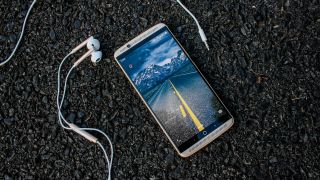 In an early contender for the strangest announcement of MWC 2017, ZTE has announced a phone that it claims is the fastest 5G phone, but which has no case and no likelihood of coming to market.

ZTE says the ZTE Gigabit is the first phone to reach blazingly fast 5G speeds – but don't hold your breath for the chance to buy one. This is very much a proof of concept right now – which means it's a collection of components.

The ZTE Gigabit phone is apparently able to reach download speeds of 1Gbps, or 10 times current smartphone speeds, according to the Chinese phone manufacturer behind the Axon 7 (pictured above).

Speaking ahead of the official start of MWC, the Chinese company talked about the phone without actually showing it off.

While ZTE said the phone is not currently "in a case", it claimed it would be a "commercial offering in one or two years", with some of the technology likely to appear in the company's next Axon flagship phone in the meantime.

ZTE says it reached the speed milestone by independently developing a Pre5G Giga+ MBB solution and compatible smart devices in advance of what it has rather awkwardly named “the upcoming 5uper Generation”.

We’ve been hearing 5G a lot at MWC this year, but it's mostly been in relation to expanding connectivity to all sorts of internet of things devices.

It’s also the first to tout the Qualcomm Snapdragon 835 chipset and the integrated Snapdragon X16 LTE modem, ahead of the likes of the Samsung Galaxy S8.

That said, Samsung next flagship is going to actually come to market.

Setting aside the nature of the 'phone', that’s going to be important as we all transition from 4G to 5G. It’s supposed to provide worldwide carriers with the first Pre 5G solutions, an initial bridge to 5G.

Going forward, download speeds of up to 1Gbps will become the standard on 5G networks and, then, “mobile experiences on smart devices will be enhanced to an unimaginable level”, envisions ZTE.

“Speeds of up to 1Gbps will improve users’ lifestyles by allowing for 360-degree panoramic VR video, instant cloud storage, entertainment upgrades and fast cache of ultra Hi-Fi music and movies.”

Streaming will also become the norm for more than just video, too. It'll also allow for 'instant apps', which will remove the need for downloading or installation of applications.

However, you'll have to wait for 5G to become a reality in 2018 to see these speed benefits outside of Barcelona and MWC.