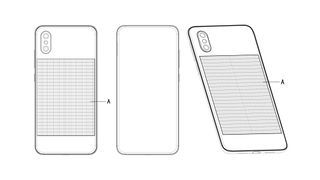 Xiaomi has filed patents with WIPO (World Intellectual Property Office) for a smartphone with a solar panel on the back. Xiaomi has become a significant player in the smartphone space around the world. However, this smartphone equipped with a solar panel is new, as it is something that hasn't been experimented with much. There are only a few companies working towards a greener solution.

As per a report by LetsGoDigital, the phone in the sketches features a full-screen display without any cutout for a notch. It could be possible that the phone uses a pop-up front-facing camera, but who knows. Then again, the patent sketches which reveal the top-edge of the phone, indicate that the phone doesn't have an outlet for a pop-up module.

It is also rumored that Xiaomi is developing an in-display camera solution; however, we don't expect that to be a part of this phone with solar-panel. Though, there sure seems to be an in-display fingerprint sensor as the back-panel is largely covered in photovoltaic panels.

Since we live in a time where smartphone usage has increased by four-folds, battery technology has also been improved and perfected to provider a better run-time than before.

However, solar-panels on smartphones isn't something that has been trialed as the technology was in its infancy. Now that companies are focusing on real innovations, we can only hope that Xiaomi can put this phone out in the market, to see how it fares.

We'll keep an eye out for the developments in this space. So, stay tuned.