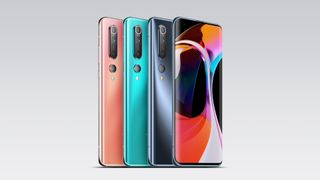 The Xiaomi Mi 10 and Mi 10 Pro have been officially launched in China, at an online-only event on February 13 which showed off the company's two new smartphones.

With a range of impressive features and specs, the new phones, especially the Pro version, seem like strong Samsung Galaxy S20 competitors, and perhaps even rivals to the top-end Galaxy S20 Ultra.

Could that make the Xiaomi Mi 10 Pro one of the best smartphones of 2020? Only time will tell, but Xiaomi phones are getting more and more popular, so it's possible.

The Xiaomi Mi 10 launch was a Chinese-only event, but we're expecting a global launch near the end of February. It was slated to happen on February 23 at Mobile World Congress 2020, but when that event was cancelled due to coronavirus worries, Xiaomi announced the launch would be pushed back.

Still, we know basically everything about the new Xiaomi Mi 10 phones, aside from the price and release date outside China, so we've listed all that below so you can get a deep dive into the specs.

We've also hypothesized on the release date and price, to help you work out whether one of these could or should be your next smartphone.

After the Xiaomi Mi 10 Chinese launch event on February 13, the release date in that country was set for February 18.

We're not too sure when the Xiaomi Mi 10 global launch event will be, as the cancellation of MWC 2020 (where it was set to take place) means the Xiaomi event has been cancelled. We'd hope to see it before the end of February though, with a release date by mid-March.

In China, the starting price of the Xiaomi Mi 10 is CNY 3999 (roughly $570/£440/AU$850), and while we wouldn't expect the price in other regions to be an exact conversion of the Chinese price, it does show the rough ballpark, so it's clear Xiaomi is aiming for a mid-range price.

The Xiaomi Mi 10 and Mi 10 Pro look very similar, with screens that curve at the edges and that are broken up by punch-hole cut-out cameras in the top left of the display.

On the back there's a camera bump in the top left corner, although the lenses spill off the bump and onto the flat of the body. Each phone has a wide range of colors available, judging by marketing material.

The display could impress many people. Both phones have a 6.67-inch 1080 x 2340 OLED screen with HDR10+, and they both also support a screen refresh rate of 90Hz, to make content and motion look a bit smoother.

We'll have to test the screen when we get our hands on these devices, but it seems pretty decent on paper.

One of the most important features of the Xiaomi Mi 10 and Mi 10 Pro is the 108MP main camera on both, seen previously on the Xiaomi Mi Note 10, which should take fantastic pictures, and supports 8K video recording like the Samsung Galaxy S20 series. The other cameras on each are different, though.

On the Xiaomi Mi 10, there's a 13MP ultra-wide camera, 2MP macro snapper, and 2MP depth sensor. These specs seem rather middling, but we'll have to test out the phone before making a definitive statement on it.

The Xiaomi Mi 10 Pro has a 20MP ultra-wide camera and two telephoto lenses. One of these is 8MP and supports 10x hybrid zoom, and the other is 12MP with 2x optical zoom, which is used for portrait mode. This combo was present in the Mi Note 10 and we were fans there, although that device also had a macro lens.

Both phones have 20MP front-facing cameras too, which is a pretty decent resolution for the selfie snapper, though we've seen better.

The Xiaomi Mi 10 and Mi 10 Pro both run on the top-end Snapdragon 865 chipset, so when the phones release in China they'll be the second (and third) phones in the world available with it after the ZTE Axon 10S Pro. That chipset has an adjacent 5G modem, and it seems that both of the Xiaomi phones will be 5G phones as a result.

The charging speeds are a bit better on the Xiaomi Mi 10 Pro though, as this has 50W fast charging, 30W wireless charging, and 10W reverse wireless charging, which lets you use the device as a wireless power mat for other devices. The Mi 10 has these same stats except the standard charging is only 30W.