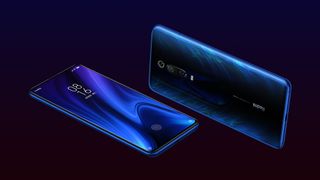 The much-awaited smartphones from Xiaomi's stable, Redmi K20 and Redmi K20 Pro are now official in India. The Redmi K20 is the company's mid-range phone while the Pro variant goes well beyond the segment and into a premium range.

It will be interesting to see how Xiaomi pushes the Redmi brand forward as the company hasn't witnessed great success with its premium Mi branded phones in the past. Having said that, the Redmi K-series looks like a new chapter for the brand and the phones surely pack a punch.

Xiaomi also revealed a Redmi K20 Pro Signature Edition which is crafted out of gold with diamond studding and is priced around ₹4,80,000. However, there is no information about when the phone will go on sale as thee company is just making 20 units of these.

Redmi K20 series goes on sale for the first time from July 22 at 12 noon and can be purchased from Mi India store, Flipkart and Mi Home stores across India.

Redmi K20 Pro is the most premium Redmi branded phone yet. The chassis is aluminum while the rear glass panel has a Gorilla Glass 5 coating. It features a 6.3-inch Super AMOLED screen with a Full HD+ (2340 x 1080 pixels) resolution and is topped with a layer of Gorilla Glass 5. There's no cutout for a notch as the phone makes do with a pop-up selfie camera. This lends the screen a 19.5:9 aspect ratio and is also HDR and DCI-P3 compatible. The screen is also home to an in-display fingerprint sensor.

The phone is powered by top-of-the-line Qualcomm Snapdragon 855 chipset with an octa-core CPU and Adreno 640 GPU. This is paired with 6GB/8GB of RAM and 64GB/128Gb/256GB storage options. It runs on Android 9.0 Pie-based MIUI 10.

Redmi K20 Pro has a triple camera setup on the back and the array consists of a primary 48MP sensor with an f/1.8 aperture, an 8MP telephoto lens backed by PDAF/Laser autofocus with 2x optical zoom and finally a 13MP ultrawide lens.

On the front, there's a 20MP selfie camera housed inside a motorized pop-up module with an f/2.2 aperture.

The Redmi K20 has the same hardware as the Pro variant with the exception of Qualcomm Snapdragon 730 chipset under the hood. It's got an octa-core CPU and is backed by Adreno 618 as the graphics processor.