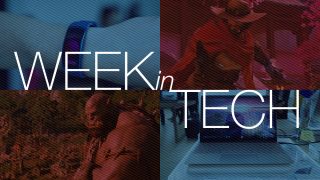 Things move fast in the world of tech: no sooner have we been told that we're entering the post-PC era than we're facing the post-app era, where voice control actually works properly. Not only that, but components are becoming so small they can be stolen by insects, wearables are doing something much more useful than telling you how many steps you've walked, Warcraft is hitting the big screen and we've got a great excuse to stay indoors all weekend. It's time for Week in Tech!

Apple's a constantly moving target, however, and new MacBook Pros are on the horizon; if the latest leaks can be trusted, the 2016 MacBook Pro is going to be thinner, will have four USB-C ports, and will have an OLED touchscreen instead of the traditional function keys.

Samsung goes up a Gear

Samsung has released its Gear Fit 2 fitness tracker, and Cameron Faulkner reckons it does a pretty good job of addressing some of the shortcomings of the original Gear Fit. It retains the overall look of the Gear Fit, but the screen is larger, it works with any Android phone rather than just Samsung devices, and it includes built-in GPS and a better media player. Cameron says it's "a positive step above the Gear Fit, packed with features and a focus on usability that was missing before".

Are apps a thing of the past?

Remember apps, those things we used to use before everything moved to voice control? Oh, sorry, that was us in the future. But, according to Jamie Carter, we're already entering the post-app era: "Cue futuristic ways of interacting with computers and data, with virtual assistants and natural language processing at the forefront," he says.

"Will we still be physically opening apps in a few years? Probably not… get ready to watch as apps are consumed within contextually-aware virtual assistants like Siri – and almost completely disappear." We think Jamie may have a different Siri to the unreliable, huffy one we have; if not, the future is going to involve a lot of swearing.

What's white and invisible? That fridge! What's tiny and packs half a terabyte? This SSD! Samsung has developed an 512GB SSD that's so small you could lose it behind a bee, if you could persuade the bee not to buzz off. And that 512GB isn't a misprint: that's half a terabyte in something the size of a fingernail that weights just one gram. It can transfer a full-HD movie in three seconds, and it's destined for next-generation PC and laptop devices – expensive ones, we imagine.

Help the aged – with wearables

Many of us use wearables to track our fitness, but they can be much more than tools for runners and gym rats. As Holly Brockwell explains, "for some people, they're far more important than that – these wearables are the difference between dependency and freedom… wearables for older people are fast becoming an essential way to keep them safe, healthy and happy".

We're in the early days of wearable technology, of course, but we're already seeing big benefits – and wearables are also helping us learn about the challenges some elderly people have to deal with every day.

Just 10 years after Warcraft fans were promised a big-screen version of their favourite video game, Warcraft has made it to the big screen – and we have Source Code and Moon director Duncan Jones to thank. Jones spoke to our very own James Peckham about being a fan, Blizzard's involvement, and the tech that made Azeroth special – including a kind of motion-capture technology that you've never seen in a film before. There's even a few Easter Eggs.

Drop everything: Overwatch is here

Cancel your weekend plans and draw the curtains: Overwatch is here, and it's brilliant. Dan Griliopoulos reckons it's "the spiritual successor to Team Fortress 2", and that it's "like eating air". He explains: "All the depth is in the characters themselves and almost nothing in the world. After all, there's almost nothing to the world.

A handful of very tight maps, a limited number of game modes, and a good roster of characters. That's it. No metagame, no unlocks that matter, no in-game customisation. Just six mad characters killing six other mad characters, in the purest, most pared-down team conflict."