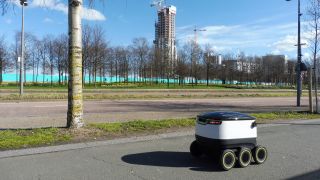 If you live in London and happen to spot a six-wheeled robot on the street in the coming weeks, don't be alarmed - it's just one of Starship Technologies' food delivery bots. It means no harm.

The company has announced its autonomous bots will be delivering Just Eat and Pronto food orders across the city, starting this month.

The robots are designed to deliver within a 2-3 mile radius, guided by GPS and other sensors, and will move at about 4mph.

However, don't get any ideas about pickpocketing one - the customer has to enter a unique code at the other end to open the robot's lid and and pick up their food.

The robots are also monitored by a human, who can take control at any time.

A Starship spokesperson told TechRadar that the company hasn't yet decided on which areas of London its robots will cover, but said it is looking at the "most suited" parts to begin with.

One of the those will be Greenwich, where much of the testing has taken place. We were also told that Milton Keynes was another location it's looking to launch in soon.

30 of the robots have already been tested in Greenwich, Milton Keynes and Glastonbury, racking up 5,000 miles and, so far, zero casualties. Starship says its robots have met over 400,000 people so far without a single accident.

The test program will also run across other European locations using different delivery services, before some of the robots make their way over to America.

"We're sure to come up against challenges on our journey, but our aim will never change – to re-define convenience and customer service for the consumer, whilst making the last mile industry for businesses cost effective, efficient and profitable," said Allan Martinson, Chief Operating Officer of Starship Technologies.