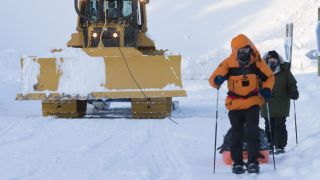 The team will set off for real next year

It's being called the "The Coldest Journey". Sir Ranulph Fiennes, Britain's legendary polar explorer, more accurately describes it as the "greatest challenge of human endeavour remaining on Earth."

We also like to think of it as the ultimate test of modern tech: the first winter crossing of the Antarctic.

The traverse will take a grueling nine months to complete, in temperatures of -80°C and 24-hour darkness. En route, Ran and his intrepid team will conduct the first up-close tests of the Antarctic winter environment as well as record the adventure for posterity.

"Scott famously travelled sixty or seventy miles in the Antarctic winter, which he called 'the worst journey in the world', a century later we're proposing to travel 2,000 miles," says Operations manager Tristam Kaye.

"But we've had to develop new and exciting technologies, with the help of our sponsor, Talus Outdoor Technologies, just to enable us to survive in those conditions. When it's -80°C, the tissue of your lungs burns when you breathe, so we've had to come up with new facial mask technologies. We've also developed extremity heating devices for our clothing, so that feet and hands don't freeze."

Taking the brunt of the bad weather will be 68-year old Fiennes and his long-time colleague Dr Mike Stroud. The pair will literally walk the journey, ensuring safe passage for a caboose hauled by an indefatigable Caterpillar D6N Antarctic Tractor, that's part living quarters, part science lab and all life-support.

Kaye describes the caboose as a shipping container on skies. "We obviously have contingencies, if it fails and the team has to use tents it can. But the caboose, which is insolated and kitted out with all the computing and communications equipment, is key to the success of the project."

Hardware partner Panasonic is supplying the expedition with Toughbook-branded laptops and tablets for science, communication and editing, in addition to both broadcast camera/recorders and consumer-grade photographic gear.

It was the mission's scientific angle that brought Panasonic onboard, explains Louise Hirst, the brand's business development manager. "We feel we have a global responsibility to help people reduce their carbon footprint and be ecologically sound," she told Tech Radar, "it's an opportunity to contribute to the scientific discovery that will hopefully be done."

Of course, filming deep science in the most hostile place on Earth brings unique challenges.

To help prepare for the ordeal, the Ice Team hauled their hardware to Sweden for a test run. In temperatures that dipped to below 60°C, Panasonic's pro AG-HPX250 P2 HD camera/recorders performed well.

The kit has been on similar duty – they were used on location by the BBC's wildlife teams making Frozen Planet. These P2 broadcast camera/recorders use solid state media, known to perform well in extreme conditions

Not so consumer gear like Panasonic's 3MOS HC-X900M camcorder or the brand's DMC-GH2H mirror-less DSLR and DMC-FT4 compacts; they're designed more with a two-week sojourn to Lanzarote in mind.

To help this high-street kit remain functional, bespoke insulating jackets have been devised. It transpires the most sensitive part of the cameras is the display.

"What happens is the liquid crystal freezes," reveals Hirst. "The team can't really use anything with cables either, because we found that they freeze and snap. They even have to be careful with tripods, as the liquid in the ball joints freezes." Not the sort of thing any polar explorer likes to hear, as you might imagine.

Which of course begs the question, why use consumer shooters at all? "There will be times when it's just not practical to use bigger broadcast cameras" explains Hirst, "for example when the team is abseiling down an ice cliff and want to catch the moment, or when they're in caught in blizzard conditions."

There are other benefits to using high-end consumer gear, it seems. Because the explorers will be wearing thick gloves, they can't easily manipulate manual controls. "Having consumer-friendly presets and automated controls proves to be a lot more practical." All the gear supplied can deliver broadcast quality resolution and is BBC-approved, she adds.

With the BBC and other global news outlets around the world committed to covering the event, the Ice Team have all undergone training by Natural History professionals.

The team will also be producing a regular video blog for upwards of 42,000 schools participating in the project. "Obviously bandwidth and connections with the outside world will be limited," says Tristam Kaye "so they have to be selective with what they upload."

Sir Ranulph Fiennes' six-person team will set sail from London on December 5th, and is expected to arrive at the Ross Ice Shelf in January. They will then cross the continent by land, rendezvousing with the support ship on the other side before the spring equinox in September 2013. All things being well, they'll return to London in early 2014.