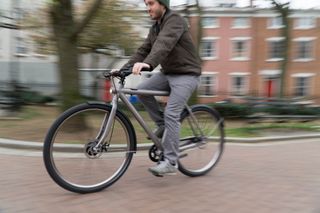 Electric bike riders often get stick from both car drivers (who are as annoyed by them as cyclists) and cyclists themselves (who see the electrical assistance as cheating).

But using an electrically-powered bicycle on a regular basis can actually improve your health, according to researchers at the University of Colorado Boulder - particularly if you're not getting a lot of other exercise.

They recruited twenty volunteers who normally commuted by car and asked them to try riding an electric bike (sometimes called a "pedelec") on their commute three times a week instead, while wearing a heart monitor and GPS device.

The researchers wanted to find out if pedelecs could help inactive people hit recommended daily fitness levels, despite the active assistance that the bike's motor offers when the rider is pedalling below speeds of 20mph.

The volunteers' health, including blood sugar regulation and fitness, was tested before the experiment and then again after a month of cycling. The results showed a major improvement in the riders' cardiovascular health, along with increased aerobic capacity and blood sugar control.

"Commuting with a pedelec can help individuals incorporate physical activity into their day without requiring them to set aside time specifically for exercise," said James Peterman, a graduate researcher in the Department of Integrative Physiology at CU Boulder and lead author of the paper that described the results.