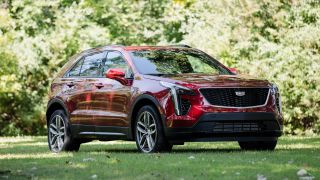 Several apps in the 2019 Cadillac XT4 don’t require a phone. That might be a simple departure from the norm – after all, we have our phones with us all day and it’s easy to connect over a wired connection or using Bluetooth. There’s no question a phone will be around for years.

However, the XT4 proves one point – we won’t need phones forever. On several trips over a one week period, I swiped through The Weather Channel app (which has a nicely designed interface with a five-day forecast) and didn’t bother asking Siri about any weather issues. I thought it was a handy feature although standalone weather apps are nothing new in cars.

Then I started investigating further and noticed there's a Spotify app that doesn’t require a phone. I can’t remember testing Spotify in any previous car without having to sync my phone.

Again, it's a small change – Spotify has worked for years in cars when you connect a phone and many music streaming apps work using both Apple CarPlay and Android Auto.

Other apps that don’t require a phone include the The Wall Street Journal, People Magazine, Fox Sports, USA Today, Dash Radio, The Washington Post, and NPR One.

I also liked the New York Times app, which provides a daily briefing on the news. In many countries and US states, fumbling with your phone while you drive is not allowed by law, but these apps don’t even require a phone – so they remove the temptation entirely.

However, that’s not the reason they provide a hint to the future. I’ve been suggesting for several years that phones will eventually become a quaint memorial of a golden age. “Remember when we used to have to carry around a phone?” Someday, we’ll talk to bots that are super intelligent so we can dictate emails (and have that actually work).

Screens will be everywhere (and in some ways they already are), but we’ll never miss having a phone since we'll be able to scroll and swipe at a restaurant, at work, and... in the car.

I’m even predicting a cultural shift entirely. Let’s say you are at the game with friends. Normally, we pull out a phone. The question is – why? Is it to tell all of our friends that we are more interested in a text? Someday our phones will be in an earbud that can read texts, or we’ll decide we don’t need to get a text while we watch our team lose.

That’s a lot to infer from a few apps in an XT4 crossover, but there’s a reason it makes sense to use apps in the car that use their own data connection just as there is a reason to leave the phone behind. Cars will get smarter, and so will technology. Our ability to communicate with each other will improve as well and phones will eventually become relics.

And no one knows for sure. We might all use holographic displays on our wrists, or bots implanted into our cheekbones. I like that the XT4 is moving away from such a reliance on our phones to provide the apps and the data connection. We might keep our phones stowed longer.