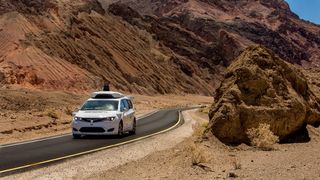 You might have noticed your phone has an annoying habit of switching off and rebooting whenever it gets too warm, and that's not really something you want happening to your self-driving car - which is why Waymo (the company spun out from Google's self-driving car efforts) has been testing its vehicles in Death Valley, California.

"This type of testing allows us to be confident our vehicle can cool itself and continue to operate under the hottest temperatures, even with an engine running at full power and our systems running at full capacity," explains one of the Waymo engineers.

Waymo put some of its newest Chrysler Pacifica cars through their paces in the desert, covering all aspects of driving - stop-and-go-traffic, idling for long periods or time, sloped roads and so on. The company says it was taking more than 200 measurements per second to ensure everything carried on functioning in the baking heat.

Thankfully, everything ran smoothly - you wouldn't really expect Waymo to put up a Medium post about the trip if everything had gone disastrously wrong, after all. Cabin temperatures remained cool and the autonomous systems were able to continue ticking along as normal.

"No matter where our riders choose to drive  - even if that's in the middle of the desert, on a sunny day, with the air conditioning on full blast -  Waymo's cars will still be able to get them where they need to go," adds Simon the engineer.

The cars were also tested along the Vegas strip, not a particularly relaxing driving spot for either humans or robots. Despite the occasional bump, self-driving car technology continues to advance at a rapid pace - and once prices come down and authorities give the okay to make them road-legal, we'll all be able to put them to the test ourselves.