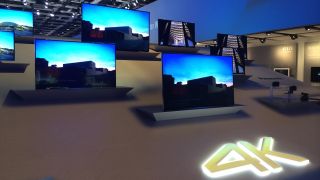 Not many people have these in their living rooms yet

Video site Vimeo has begun supporting 4K, but there's a catch: you can only download 4K videos from the site rather than streaming them.

Netflix offers 4K streaming, Amazon made 4K strides in the fall, and even 4K TV broadcasts are in the works - so what's Vimeo's problem?

Well, the thing about those 4K options is that they're all streaming to users' TVs - and Vimeo is apparently primarily used on devices that aren't equipped for streaming in 4K.

That includes affordable streaming devices like Chromecast and Roku and computers without a 4K monitor, which is the vast majority of them, Vimeo CTO Andrew Pile told GigaOM.

But Pile explained that many Vimeo content creators shoot in 4K with Red cameras, and the site wants to support them.

For now that's the only option for Vimeo users, though Pile implied things might change relatively soon when he said the new 5K iMac will be "a turning point."

"While we're not rolling out 4K streaming just yet, it is something we're working on and looking forward to providing when the timing and viewer bandwidth support makes sense," a Vimeo spokesperson added over email.