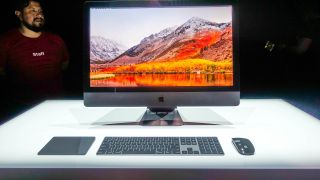 Apple’s latest T2 chip was first introduced to us last year when it made an appearance in the tech giant’s then-newest computers, the 2017 iMac Pro and MacBook Pro.

The processor uses an ARM-based architecture and is designed to handle some of the newer features that were introduced in last year’s MacBook Pros, including the Touch Bar and Touch ID. On the iMac, it looks after video and graphics rendering, along with beefing up security by allowing firmware-level passwords to be set.

Unfortunately, it's also been speculated that the T2 chip could render a Mac inoperable if certain components were replaced as part of third-party repairs. This aspect was first revealed in October, when internal documentation emerged that suggested the T2 chip requires a proprietary diagnostic tool to be run after any repairs are made.

While Apple didn’t respond to these reports when they first surfaced, the Cupertino firm has finally confirmed to The Verge that the earlier rumors are true.

According to The Verge’s report, Apple has officially stated that “repairs involving certain components on newer Macs, like the logic board and Touch ID sensor” cannot be done by third parties.

Apple has not elaborated on what “other” components are affected, however the internal documents unearthed last month specifically list the display assembly, logic board, top case, and Touch ID board for the MacBook Pro, along with the logic board and flash storage on the iMac Pro. This could mean that the newly announced Mac mini and MacBook Air will also be affected.

The official confirmation has raised concerns amongst Apple critics that the company is further locking its customers into its own ecosystem. In an email to The Verge, iFixit’s CEO Kyle Wiens called it “a guillotine” being held over the necks of Apple users.

The tech giant has previously locked out iPhones from third-party repairs, for which the company was fined millions of dollars in Australia.