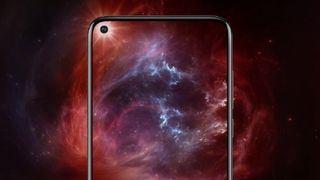 2019 could be the year of the pinhole phone camera, by which we mean a circular cut-out for a camera in the screen. But at least one such handset is set to arrive before the end of 2018, as Huawei has announced that the Huawei Nova 4 with just such a camera is being announced on December 17.

We've seen the company tease the device a couple of times already, but the latest teaser image, posted to Weibo (a Chinese social network), gives more away.

It contains both the date December 17 and clearly shows a camera cut-out in the screen, where previous teasers had shown a beam of light or a black hole in the night sky.

Those teasers were never particularly subtle, and we had also seen a leaked image seemingly showing the Huawei Nova 4 itself, so there was little doubt that it would have a pinhole camera, but now that feature and the phone’s announcement date are confirmed.

The first but not the last

Aside from its unusual camera design we don’t know a whole lot about the Huawei Nova 4, but it’s rumored to have 6GB of RAM and the high-end Kirin 980 chipset (the same one as you’ll find in the Huawei Mate 20 Pro), so it could be a decent handset.

It’s worth noting though that it’s not yet clear whether you’ll be able to buy the Huawei Nova 4 outside China. But if not and you have your heart set on a phone with a pinhole camera you shouldn’t have too much longer to wait.