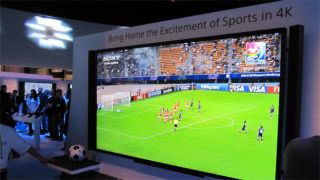 Unlike England, Sony actually turned up to this year's World Cup to do something useful: shoot the action in 4K.

Unfortunately for the general public, filming in 4K has so far only been a test to make sure that we will actually be to film live sports in Ultra HD going forward. But you can now see what the World Cup looks like in 4K, thanks to a little roadshow Sony is doing.

Sony revealed to TechRadar last week that it was planning to send the highlights back to the UK, with thousands of retailers across the country getting a 2-3 minute highlights package, and now What HiFi has revealed locations that will be showing the footage on Sony's Bravia X9 television. Which just happens to be the official 4K TV for the World Cup.

Sony is only shooting a few games in 4K, and has the UHD cameras dotted around to grab a few moments of the action in the higher resolution, with the main base being in the Maracana in Rio de Janeiro.

The footage is compiled into a highlights reel then shot off to a server, where retailers can then downloads the several gigabytes of data needed for the short amount of action.

Sony is also looking into the possibility of showing the 4K footage in cinemas too, so if you're hankering for a spot of the World Cup in crystal clear quality and don't happen to work for the BBC, then you might still have options.

If this isn't enough 4K action for you, Sony will be releasing an official 4K film of the tournament later in the year.

The list of stores that will begin showing the World Cup in 4K are:

This is how Sony is filming the World Cup in 4K