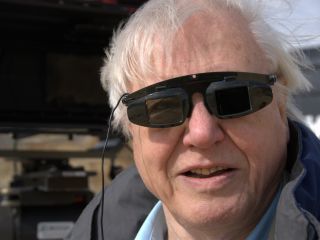 Sir David Attenborough and Sky link-up for another 3D special

Sky has announced its latest 3D wildlife documentary to be written an presented by Sir David Attenborough.

Galapagos 3D will be a three-part series to air on Sky 3D in late 2012 and is the fourth collaboration between the satellite provider and the wildlife TV pioneer.

Attenborough says that the remote islands in the Pacific represent the perfect location for a 3D series as the native creatures remain unbothered by the presence of humans.

He said: "One of the things that make them even more extraordinary is that because the islands were not discovered by human beings until relatively recently, and they had remained isolated for so long, the animals still haven't become frightened of human beings.

"You can walk among them carrying your own snap shot cameras or even carrying a 3D rig and they won't go away. They continue behaving in just the way that they would do naturally. Galapagos is full of drama, full of charismatic creatures which you can film; it is a natural for 3D"

Galapagos 3D will follow on from the success of Flying Monsters 3D and eagerly-awaited The Bachelor King 3D which will premiere on Sky 3D on New Year's Eve.

Sky also has Kingdom of the Plants 3D, a series about London's Cue Gardens, in the can, which will air on Sky 3D sometime in 2012.